Trump's Presidency might be over, but the conservative comeback is not

Allegations of election fraud must be cleared up.

I thought Donald Trump would win. It appears I was wrong.

His presidency is over unless he can prove in court there was enough voter fraud to skew the result.

I’m convinced there are questions that need to be answered. I’m not convinced the answers will provide evidence that would convince even Trump’s appointments to the US Supreme Court to overturn the result.

But the next few weeks will tell.  And despite what his haters say, Trump is entitled to seek adjudication in the courts.

I for one want to know how many Biden mail-in votes turned up after election day with no post mark to prove they were cast before November 3.

I find it unfathomable that US Courts allow mail-in votes to be counted even when there is no postmark to prove they were cast before polls close.

Another for the “only in America” file.

Why did dumps of hundreds of thousands of ballots, almost all for Biden, suddenly materialise in key states when Trump was leading?

Why were Trump’s scrutineers denied access? Can you imagine that happening in Australia?

Election night trends, once established after a critical mass of votes have been counted, are rarely so dramatically reversed.

Even the anti-Trump pundits could see it.

The CNN election coverage took as sombre a tone as that of Australia’s ABC’s election night coverage when it became apparent Scott Morrison, not Bill Shorten would win.

If the worm turned legitimately, I look forward to the media commentary explaining this extraordinary phenomenon.

I get that the majority of mail-in ballots favoured Biden, but when 130,000 ballots dump at 4:30 in the morning and there are just 3000 votes for Trump, something seems very strange.

Has that ever happened in an election outside of Zimbabwe? Maybe I’ve been listening to Steve Bannon too much but I’m keen to see if Trump’s concerns stand up in court or if they can be legitimately explained away.

And if all of these and more anomalies can be reconciled, fine. Those of us who favour a Trump/Pence White House should fold our tents.

And so should Trump. With grace.

I’m not holding my breath that that will happen but let’s wait and see how the next few weeks play out.

What is far more alarming than the fake fear that was whipped up about supposed Russian interference in the 2016 election is the actual interference by our Big Brother Tech Tyrants in Silicon Valley.

Billions of us around the world signed on to Twitter, Facebook and Google believing they were ushering in a new era of freedom of speech.

Their malicious intent as the arbiters of “truth” is now unmasked.

They have censored or dropped in caveats on Tweets and Facebook posts from the White House to my house, when the approved line is not towed.

“Missing Context. The same information was checked in another post by independent fact-checkers,” Facebook wrote on my page. 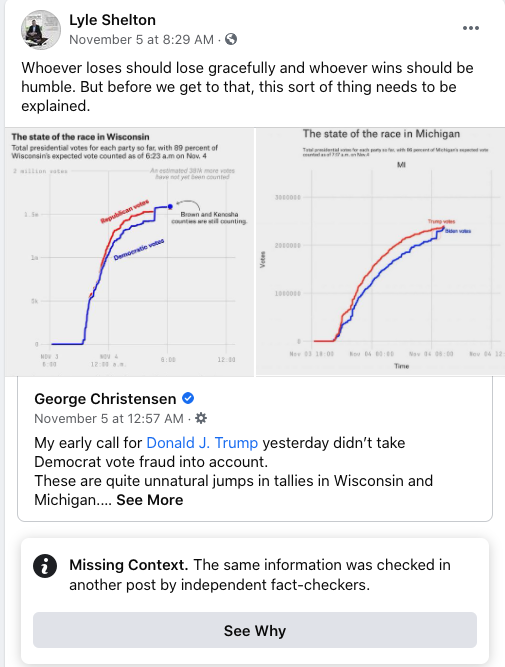 Big Brother is watching and will correct your posts. We all need to move to Parler, fast.

If Trump loses it appears voters have rejected his bombastic style but not his agenda.

Greg Sheridan insightfully points this out in today’s Weekend Australian:

As one wag put it, the election was a contest between those who disliked or hated Trump’s personality, as opposed to those who disliked or hated the Democrats’ swing to the left. Democrats talking of socialism, defunding the police and ending fossil fuels is enough to make voters very wary. Commentators routinely decry gridlock. But Americans vote for gridlock quite deliberately.

The “Blue Wave” predicted by the mainstream media and the pollsters didn’t materialise. How these people can get it so badly wrong two elections in a row is mind boggling.

They are purveyors of propaganda seemingly aiming to influence the election, not provide informed commentary or accurate data.

Instead a Red Wave locked in Republican control of the Senate and swept Republicans into 27 of the 50 Governors’ mansions in the corresponding state elections.

Biden and his radical left running mate, Kamala Harris will surely be stymied in implementing their agenda.

Trump threw a rock in the Washington establishment’s pond.

He has emboldened “deplorables” the world over, providing hope to those who don’t want to be ruled by woke PC overlords who are hysterical about the climate and assert white people have racism in their hearts because they are white.

The stakes were higher than ever at this election and the voters knew it.

With 72 million votes so far, Joe Biden won more votes than any Presidential contender in US history. So too did Trump, even though he lags Biden by a couple of million votes.

Both men are more popular than Barak Obama.

Trump’s movement hasn’t gone away. It is half the country and it is strong enough to withstand the loss of the White House but take fire insurance on the Senate and the State Houses.

These people, “chumps” as Biden sneeringly calls them, have not drunk the elites’ Koolaid.

Win or lose the White House, Trump’s conservative revolution is here to stay.