“Dr Levine, you have supported both allowing minors to be given hormone blockers to prevent them from going through puberty, as well as surgical destruction of a minor’s genitalia.” – US Senator Rand Paul questioning a now USA Today “woman of the year”, who happens to be a biological male and transgender activist.

The “only in America” file was the basket we once put the inexplicable and downright nutty from across the Pacific.

As much as we admire our American friends, crazy stuff has always happened there.

But in this new interconnected world Australia is never far behind and that’s why what’s happening there matters now more than ever.

This week’s offering is a “woman of the year” who is, in reality, a biological male.

The national USA Today newspaper named Rachel Levine as one of its Women of the Year, a recognition of women who have made a significant impact.

Levine is the assistant secretary for health for the US Department of Health and Human Services, and the head of the US Public Health Service Commissioned Corps, where he leads a group of 6,000 uniformed public health officers.

As a senior Biden administration official, Levine has played a key role in the US’s Covid response.

The only problem is that Levine is hardly a trailblazer for women.

He is a trailblazer for men who have appropriated women’s gender and then taken career opportunities from them.

But what’s worse is that as a transgender activist holding a key public health portfolio, Levine is potentially a danger to children. 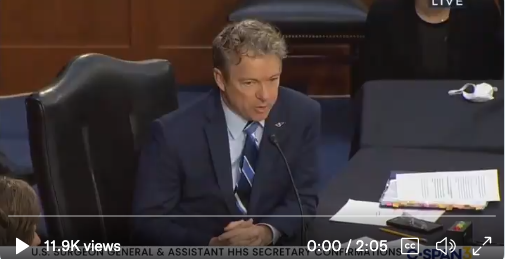 Here’s part of the transcript from the video.

Senator Paul: Genital mutilation has been nearly universally condemned. According to the WHO (World Health Organisation), genital mutilation is recognized internationally as a violation of human rights. Genital mutilation is considered particularly egregious because, as the WHO notes, it is nearly always carried out on minors and is a violation of the rights of children. Dr Levine, you have supported both allowing minors to be given hormone blockers to prevent them from going through puberty, as well as surgical destruction of a minor’s genitalia.
Dr Levine: Well, senator, thank you for your interest in this question. Transgender medicine is a very complex and nuanced field with robust research and standards of care that have been developed. And if I am fortunate enough to be confirmed as the assistant secretary of health, I will look forward to working with you and your office and coming to your office and discussing the particulars of the standards of care for transgender medicine.

This is how elites dodge questions. In their view, ordinary people are too stupid to understand the “complex nuances” of “transgender medicine”. These are are weasel words to hide reality.

Senator Paul: Let’s be a little more specific since you evaded the question. Do you support the government intervening to override the parents’ consent to give a child puberty blockers, cross-sex hormones, and/or amputation surgery of breasts and genitalia?

He went on to reference British woman Kiera Bell who now regrets having had her breasts cut off because she believed LGBTIQA+ gender ideology as a child.

Bell has kindly provided my legal team with an expert witness statement to help me defend the anti-free speech case brought against me by two LGBTIQA+ drag queens.

If you watch the video, you will see that yet again, Levine refuses to answer Paul’s questions, continuing to obfuscate about “nuance” and “complexity”. 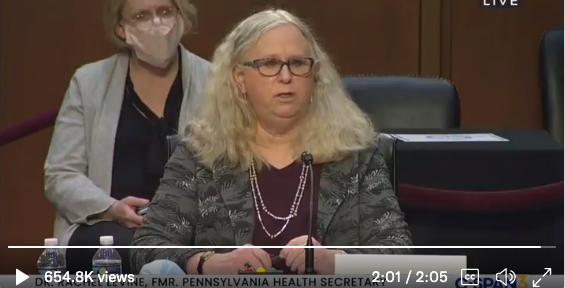 In a glowing interview with USA Today about his achievements as “woman of the year”, Levine is asked what motivates him.

“I'm always motivated by my children, who motivate me to work for the common good.”

The only problem with that is that Levine is not their mother, this “woman of the year” is their father.

And the piece, unsurprisingly, gives a leg to LGBTIQA+ gender fluid ideology.

To those who accept emotivism as the new logic, this makes perfect sense.

But Levine “being true” to himself means in reality that women seeking senior roles in the Biden administration miss out. We've lost sight of the fact that our actions have consequences as do ideas. That's why they must be tested, not cancelled.

Of course everyone has “tremendous worth” – that is why LGBTIQA+ ideology has resonance but that statement goes without saying. We all believe that.

But having “tremendous worth…no matter who you love” has consequences for other people, particularly children.

A sterile same-sex relationship requires assisted reproductive technology to trample the human rights of other women and children in order to please the same-sex couple.

Sadly most Australian Liberal and Labor politicians buy into this ideology but Labor is more aggressive in its support of it.

With Anthony Albanese on the cusp of becoming prime minister, he should be asked his views on treating children with hormone blockers, cross sex hormones and the surgical destruction of their breasts and genitalia.

If only journalists would do their job.

It’s only a matter of time before some woke group here nominates a biological man as “woman of the year” and this process will be accelerated under a Labor/Green government.

Let’s speak up now for the sake of girls, women and motherhood.