What elites GetUp to in Canberra

Canberra bubble Koolaid was the beverage of choice yesterday to wash down the raw steaks they serve at the National Press Club.

It’s probably only a matter of time before meat on the menu falls victim to “climate emergency” measures - we’re living in tough times. But apparently the effervescent gasses released from the bubbly have no impact on the health of the planet. Thank Gaia for that.

The Canberra bubbly does strange things to journalists. Tiny popping droplets splashing in the eyes and up the nose create a mist which obscure the radical Left hiding in plain sight.

Exhibit A was GetUp director Paul Oosting speaking at the club yesterday. 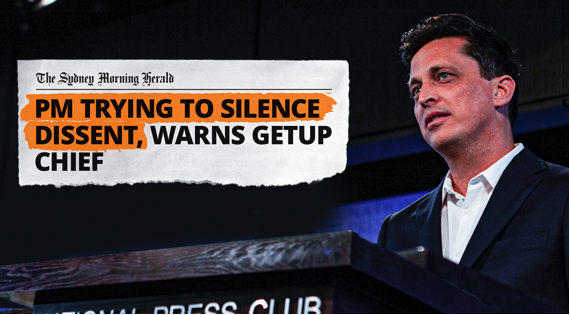 No one noticed his trashing of Australian democracy, his prescription for poverty and his demonisation of those who are at the forefront of protecting mainstream values.

It’s self-evident that GetUp is here to help the voters get it right.

Oosting’s description of Scott Morrison’s government as “undemocratic” and “authoritarian” juxtaposed with the manifestly good (but unelected) United Nations sailed straight through to the keeper.

Never mind that the “quiet Australians” in the “miracle election” (which the Left thought it had in the bag) said thanks-but-no-thanks to the UN’s climate change policies, carried lock-stock-and-barrel by Bill Shorten to the May election.

But you see, Oosting had the journos at “climate change”.

GetUp is pursuing a righteous cause to repair the democratic damage the quiet Australians did by voting the wrong way. Too many pesky questions might upset the project.

Oosting is free to lump Morrison in with those other “authoritarian hard right” figures like Donald Trump, Boris Johnson and Hungary’s Victor Orban while praising the virtuous UN.

The Fourth Estate, by this time well and truly enjoying its midday tipple, missed that all four leaders, rather than gaining power through what Oosting describes as “authoritarianism”, were elected by their people.

All three have in common the fact they have pushed back on supra-national bodies like the UN and the European Union. They each want their own nation to run….their own nation.

But with the people so misinformed that they can’t see what their experts are telling them about their need to embrace climate austerity, GetUp is here to help.

And those terrible “hard right” Liberals fighting for more base-load power so the lights don’t go out in our renewables-vandalised grid, are just beyond the pale.

If only “quiet Australians” would embrace the renewable dream and stop worrying about how to pay the bills. The planet is burning.

Going out of his way to show empathy to errant mainstream Australians, Oosting said the enlightened class had to listen to them more. Fine sentiments but in an unfortunate lack of discipline he let his inner totalitarian show by labelling them “climate deniers” who “should not be engaged”.

And of course GetUp is completely politically independent. Why else would Oosting decry the business community (read economic prosperity generators) for providing campaign funds to the conservative side of politics but not breath a word about big unions’ millions to Labor?

Not to mention Aldi plastic bags stuffed full of green notes from the Chinese.

GetUp shows its “independence” by attacking the Coalition’s funding base while leaving Labor’s right alone.

Nothing to see here folks and, of course, no questions from the gallery on that score.

And while on funding, Oosting was on a mission to set the record straight. That authoritarian Morrison has done so much damage. In the “last financial year” (note that time period), 95 per cent of Get Up’s money came from “everyday people”. Just six donations were over $50,000 and presumably none from foreign sources.

If only the hacks were not swooning so much over the Apostle Paul’s midday sermon there could have been a headline: “Oosting says GetUp off Soros teat”.

But back to more important matters. It’s no good that Australians are already bearing the burden of high electricity prices and high taxes to subsidise unreliable renewables, Get Up is here to make sure Morrison inflicts an even heavier burden on working families and small business. This is a “climate emergency”, after all.

And while GetUp doesn’t back the Extinction Rebellion rabble, Oosting said it was okay for the kids to skip school to protest.

So as the afternoon drifted on it was clear GetUp’s message was “more pain, deniers”.

And what will all this cost?

If it wasn’t for the Canberra bubbly, curiosity on that point might have been aroused.

Pour me another, please.