When government does the bidding of radical activists

When government does the bidding of radical activists

IN THE ten years I was with Australian Christian Lobby, radical LGBTIQA+ activists constantly tried to cancel us by having us booted from venues we sought to hire.

Whether it was the Wesley Centre in Sydney for our annual conference, the Hyatt Hotel in Canberra or the Mercure Airport Hotel when the Coalition for Marriage tried to hold a meeting, harassment had to be factored.

Their tactic was to pile-on the social media pages of the parent companies' of venues, falsely demonising us as bigots, homophobes and haters.

Yet they could never give one example of our alleged crimes. They never engaged with our public policy ideas. They just wanted to paint us as toxic so we would be cancelled.

It is one thing to have intolerant political activists pressuring corporations to deny freedom of religion, speech and association, it’s quite another to have a state government jump on the bandwagon.

But that is what has now happened and that development, less than four years since same-sex marriage was passed, is chilling.

News broke this week that ACL had been refused venues in Albany and Perth for managing director Martyn Iles “The Truth of It” speaking tour because ACL’s views did not align with the government. Seriously? 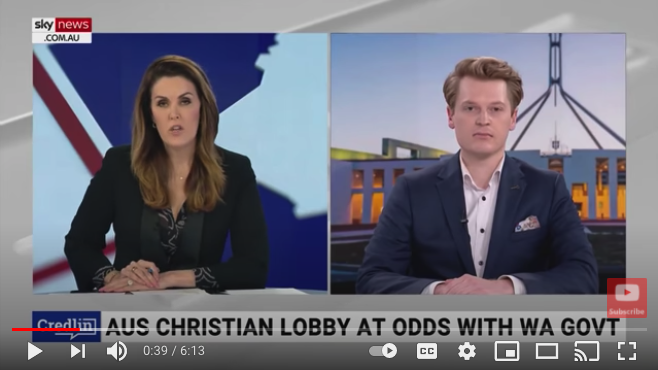 As academic Stephen Chavura pointed out in an on-line video, this is the sort of behaviour one would expect from North Korea or the Chinese Communist Party.

Interestingly, it emerged yesterday that apart from Christians, the McGowan government also bars events with links to anti-CCP Taiwan and Tibet.

LGBTIQA+ activists and the McGowan government seem to share more in common with the bullies of Beijing than they do with tolerant mainstream Australia.

The biggest external threat to Australia is the CCP’s ambitions for extraterritorial empire.

The Christian Democratic Party, with its presence in the New South Wales Upper House, has always been a voice for freedom but this week’s developments indicate our fight is only just beginning.