Why Scott Morrison can succeed

Morrison has the ticker to be another John Howard.

After Australia’s lost decade, it is vital that Scott Morrison’s Prime Ministership is a success.

The Left of politics, which includes most of the media, threw the kitchen sink and more at him over the summer.

Sure, there were missteps on the bushfires and it shouldn’t be a secret when the PM goes on holidays.

The turmoil in the Nationals and the ‘sportsrorts’ affair which claimed the scalp of a minister have not been the Government's finest moments.

But none of Morrison’s wobbles were hanging offences and none warranted the tsunami of criticism that was unleashed.

The horrendous bushfires were used as a proxy to attack Morrison for a perceived lack of action on climate change, the Left’s great moral cause, and to seek to de-legitimise him as our leader. It was brutal.

The anti-leadership coup culture in Australian politics, which was normalised when Labor’s faceless men egged Julia Gillard to tap Kevin Rudd, has left a toxic legacy.

While rule changes in the major parties now make it virtually impossible for the colleagues to assassinate a sitting Prime Minister, the Left are giving it everything they have to knock Scomo off his mojo.

Suddenly Morrison the miracle man of the 2019 election was floundering in the polls as it appeared sections of the public had turned against him.

But Morrison is tough. We saw this during his period as immigration minister when it was his job to stop the evil people smuggling trade which was killing so many innocents and making a mockery of our borders.

During that period, Morrison stared down the Left who viciously and falsely asserted Australians were cruel, heartless xenophobes because of our immigration policies.

He stopped the boats, saved lives and was generous with our legal immigration program.

Morrison has recovered quickly from the black summer and his government has been on the front foot responding to the next unexpected crisis, coronavirus.

Signs that Morrison has the ticker to become our first successful long-term PM since John Howard were on display when he fronted up for an interview with ABC 7:30’s Leigh Sales on Monday night. 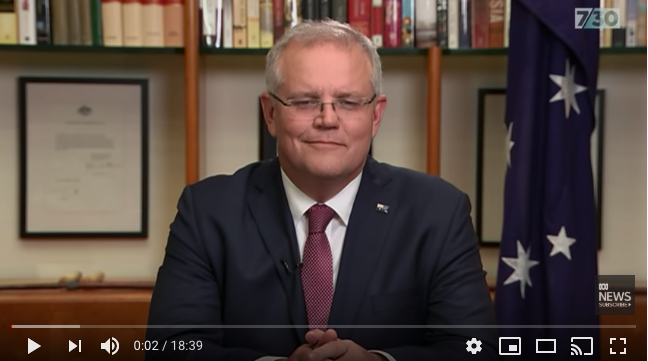 Sales is a tough interviewer and she is of the Left.

But Morrison was impressive resisting the imputations inherent in her line of questioning that the government was doing nothing on climate change.

He also rebuffed Sales’ assertion, which is one that is gaining traction in the media, that the government has no economic agenda.

Morrison listed an impressive array of infrastructure spending and tax cuts all designed to stimulate the economy.

He’s clearly trying to draw a line under Australia’s current climate change actions which have cost us billions in pursuit of our Paris commitments to reduce emissions by 26 per cent by 2030. Appearing to be applying the brakes to the runaway train that is climate policy has the Left and the media fuming.

This is the certainty and reassurance from their leader mainstream Australians worried about the economy and their jobs crave.

Just as well because the CSIRO has revealed that achieving Labor’s policy of net zero emissions by 2050 would decimate our rural sector and cost the economy $1 trillion to achieve.

Monday’s interview was also important for other details it revealed.

Sales repeated the climate alarmists’ usual tactic of comparing Australia with the UK to assert we are dragging the chain on renewable energy.

The Left never tell the full truth but on live TV, Morrison called them out.

“The UK also has nuclear power, Leigh,” a home truth the Left never mention when extolling the UK’s climate virtue.

“They also have a big extension cord which plugs into the nuclear power in France.”

Suddenly some reality was being injected into the debate.

The media continually asserts, on a rolling loop, that the Morrison Government are immoral laggards for failing to transition the economy to the renewable energy future.

Australians have been badly misled about what is possible. Wind and solar can’t even come close to powering a modern industrialised economy. Who knew?

If we had nuclear power, we could reach net zero emissions by 2050 but the Green-Left hates nuclear power because it hates modern industrialised society and wants to tear it down.

Morrison also cleared up a niggling issue that goes to his integrity – something any serious Christian must take seriously.

When asked about whether or not he had included Hillsong Pastor Brian Houston on a list of people he wanted invited to a White House dinner last year, Morrison fobbed the question off as “gossip”.

Sure, he didn’t want to cause embarrassment to the White House from where the leak most likely originated, but it was good to see him clarify that Houston had indeed been included on his wish list and admit that he could have handled the issue better.

Clarity, courage, authenticity and truth-telling are essential qualities in a leader. Politics is the hardest profession in the world in which to get these right.

Morrison has shown in the past he has the ticker to stand up against the Left on their pet moral issues. As Prime Minister, they are not his friends and they are playing for keeps.

His interview with Sales showed again he has what it takes to stare down their lies and half-truths.

As Scomo gets back his mojo, expect more of this.