Good news for freedom of religion.

An LGBTIQA+ activist attempt to criminalise people for quoting the Bible failed in Finland today.

The Helsinki District Court threw out the “hate speech” charges against them, saying that “it is not for the district court to interpret biblical concepts.”

Räsänen had been sued for quoting the Apostle Paul on Twitter.

Therefore God gave them up in the lusts of their hearts to impurity, to the dishonouring of their bodies among themselves, because they exchanged the truth about God for a lie and worshiped and served the creature rather than the Creator, who is blessed forever! Amen. For this reason God gave them up to dishonourable passions. For their women exchanged natural relations for those that are contrary to nature; and the men likewise gave up natural relations with women and were consumed with passion for one another, men committing shameless acts with men and receiving in themselves the due penalty for their error. - Romans 1:24-27 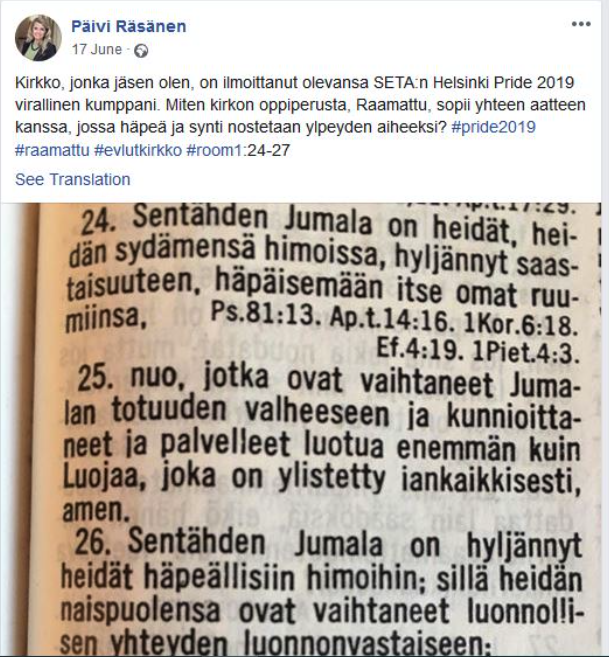 The 2019 Tweet was rebuking her own Lutheran Church leadership for supporting a homosexual pride week.

According to the pair’s legal team, Alliance Defending Freedom International, her co-accused, Bishop Pohjola, faced charges for publishing Räsänen’s pamphlet for his congregation over 17 years ago.

The court’s decision was unanimous and the prosecution was ordered to pay 60,000 euros in legal costs.

“I am so grateful the court recognized the threat to free speech and ruled in our favour. I feel a weight has been lifted off my shoulders after being acquitted. Although I am grateful for having had this chance to stand up for freedom of speech, I hope that this ruling will help prevent others from having to go through the same ordeal,” Räsänen said, following her victory.

I am hoping for a similar outcome in the court case brought against me by two LGBTIQA+ drag queens.

The case has dragged on for two years with no end in sight and cost $100,000 in legal fees so far.

All around the world, LGBTIQA+ political activists are using the courts to try and silence Christian teaching on sex and gender.

Never miss and update from Lyle, sign up today.