“We have a right to perform, regardless if it’s to children or adults.” – Diamond Good-Rim

Today’s Courier Mail contains a lengthy feature article extolling what it sees as the self-evident good of having sexualised and gender fluid drag queen role models reading to children in public libraries.

The two drag queens using Queensland taxpayers’ money to take me to court for dissenting to this growing practice, are featured at length in the QWeekend magazine accusing me of writing “degrading and dehumanising” things about them.

A blog I published in January about the dangers of drag queen role models for children landed me on charges of “vilification”. You can read the blog here and be the judge as to whether or not my commentary is fair and reasonable.

But more importantly, be the judge of whether or not the freedom of speech should exist to say the things I have said.

The drag queens “Diamond Good-Rim” (pictured below), a recipient of an adult entertainment industry X Award, and Johnny Valkyrie, a woman presenting to children as a man, are using flawed anti-discrimination laws in a bid to have me punished and silenced for what I wrote. 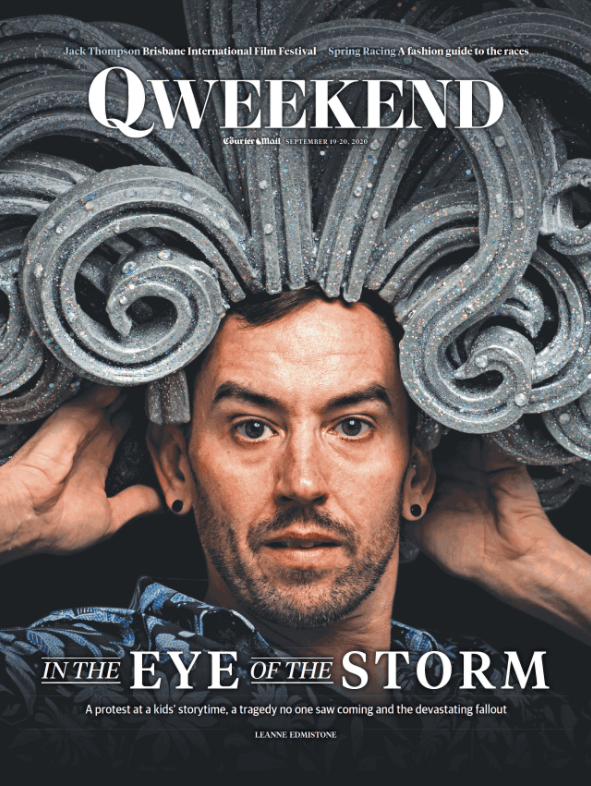 In their statements to the Courier Mail today they give no examples of what “degrading and dehumanising” things about them I am supposed to have written. I’m just slurred as part of what is now a very public justification on their part for dragging me through the Queensland Human Rights Commission and now on to the Queensland Civil and Administrative Tribunal at great financial cost and stress.

Remember, their law firm, the LGBT Legal Service, received $400,000 from the pockets of Queensland taxpayers over the past three years.

I've had to resort to crowd funding and am very grateful for the generosity of hundreds of people who have helped me so far.

The drag queens use the free kick the Courier Mail gives them to reaffirm their determination to silence me and anyone else who dares to question the appropriateness of teaching children their gender is fluid and placing adult entertainers in front of them as role models.

The journalist, Leanne Edmistone, did not seek an interview with me so that I could give my side of the story.

The great ethical virtues of journalism, chief of which are balance and fairness, don’t apply to those whom today’s Left deem “deplorables”.

A Google search of Edminstone reveals she is the co-author of same-sex marriage campaigner Shelley Argent’s biography.

Argent, who I first met at Parliament House in Canberra when we were campaigning on opposite sides of the debate to de-gender marriage, was one of the leaders of the Yes campaign in the 2017 plebiscite.

We met on more than one occasion and even spent an afternoon in dialogue seeking to understand each-other’s perspective.

While we didn’t agree on the definition of marriage, our discussion was civil.

Argent’s Yes campaign repeatedly ridiculed our concerns that de-gendering marriage would lead to children being taught that their gender is fluid and that they would be inducted into radical LGBTIQA+ sex education.

Despite the Yes campaign’s public denials while it was seeking the support of mainstream Australia for gay marriage, I was convinced we were right.

But even I have been surprised with how swiftly the rainbow political movement has moved to implement the things they said would never happen as a consequence of same-sex “marriage”.

“I want to show the community and our sisters as such – the drag community – we have a right to perform, regardless if it’s to children or adults.”

The majority of Queensland parents, who are already opposed to the rainbow political movement’s so-called “safe schools” program, would disagree with Good-Rim.

But Edminstone’s article is designed to make anyone who can’t see the self-evident good of institutionalised drag queen story time in public libraries feel marginalised.

In another betrayal of journalist principles, Edmistone self-censors Good-Rim’s drag name, calling her (or is it him?) throughout the article simply Diamond.

To get the truth about drag queen story time, one has to resort to bloggers like me who captured screen shots of some of the inappropriate and harmful material on the drag queens’ social media pages.

None of this appeared in today’s Courier Mail but I think most parents would want to know something of the background of the role models Brisbane City Council thinks are appropriate to place in front of children in ratepayer-funded libraries.

“This is an opportunity to really highlight the level of homophobia, transphobia and hatred that still thrives in Australia today,” Valkyrie tells Edmistone.

By the way, despite taking me through the QHRC and now on to QCAT, Valkyrie is yet to provide me with an example of anything “homophobic, transphobic or hateful” that I have written.

These cancel culture terms continue to be thrown around with gay abandon (pun intended).

It’s much easier to demonise than debate.

“It (homophobia, transphobia and hatered) is in the commentators we allow on platforms, and that needs to be stopped.”

A date for my appearance at QCAT is yet to be set.