Have the SA Libs been hood-winked into trashing freedom of religion?

Have the SA Libs been hood-winked into trashing religious freedom?

“Religious institutions and schools are free and are protected by our existing legislation and our constitution to teach their beliefs. That will not change because same-sex couples can get married.” – Tony Abbott’s sister Christine Forster speaking on behalf of the “marriage equality” campaign during the 2017 plebiscite.

What is going on with the Liberal Party in South Australia?

But under Premier Steven Marshall, the Libs are monstering freedom of religion.

Yes, you read that right.

The Christian schools movement is so concerned it recently posted this on their blog (which all SA readers should check out). 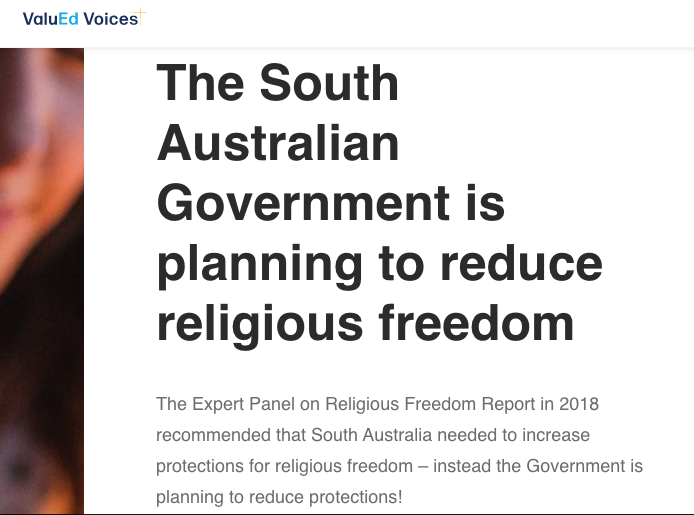 This is a natural constituency of the Liberals and they are poking them in the eye.

Of course driving all this is the SA Libs capitulation to the intolerant LGBTIQA+ political movement which will not allow space in the Australian community for anyone who does not bow to its view all things gender fluid.

Buried in Christian Schools Australia’s submission (download & see page 6) to the Marshall Government’s Equal Opportunity (Religious Bodies) Amendment Bill 2020, is a reference from Hansard from 2009 about why protections for freedom, which the Liberals are now seeking to strip away, were put there in the first place.

The reason being was “that churches would have the right to refuse to use churches or a church hall or one of their buildings for a gay wedding, for example, and also have the right to hire whomever they want in administrative roles. The amendment that I am moving simply makes that crystal clear.”

The person speaking who successfully moved that very reasonable amendment back in 2009 was the then Family First Upper House member Dennis Hood.

Hood had shrewdly predicted what was to come and acted to sand bag basic freedoms. Great job.

Fast-forward to 2017 and the so-called “marriage equality” movement was telling voters in the plebiscite there would be “no consequences” for the freedom.

Parents who sent their children to Christian schools could breathe easy.

In a debate with me on Sky News during the campaign, Tony Abbott’s sister Christine Forster, a spokesperson for the Yes campaign, said: “Religious institutions and schools are free and are protected by our existing legislation and our constitution to teach their beliefs. That will not change because same-sex couples can get married.”

The fact that CSA is now battling to preserve the freedoms of its constituent parents and schools in SA is a measure of Forster’s lying on behalf of the so-called “marriage equality” movement.

It’s a measure of their cleverness that rainbow activists are on the cusp of having the SA Libs break their marriage plebiscite promise for them.

Hood is still in the Upper House but these days has joined the Liberal Party and is the Government Whip.

Let’s hope he can prevent his new party from being hood-winked into helping the radical LGBTIQA+ political movement strip away the protections he brought in and which the SSM movement said would never be touched.

The fact that the party of Menzies is doing this at all is bizarre and damaging to its brand.

That rumbling you feel beneath your feet is the great man stirring in his grave.