Kevin Andrews will be missed.

I’m going to have to start taking screen shots. 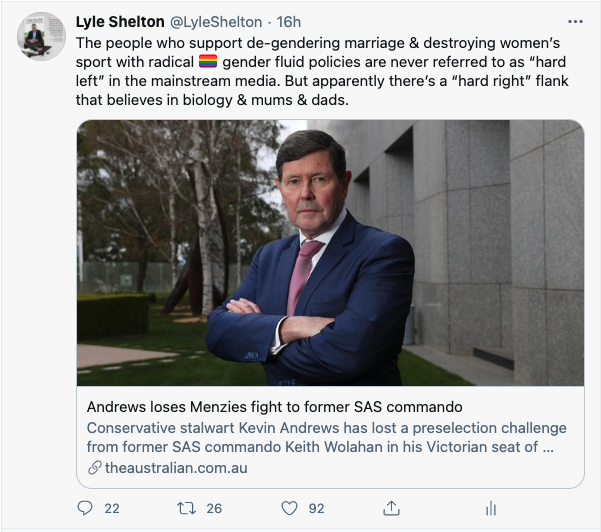 Journalist Richard Ferguson’s coverage of the long-serving and respected Member for Menzies’ disendorsement by party members yesterday sought to give him and his supporters a kick on the way out.

Instead of reporting the news, Ferguson seemingly wanted readers to believe that Andrews was part of some toxic nefarious grouping withing the Liberal Party of Victoria.

Before unpacking what these terms mean, it is worth noting that this morning the phrase “hard right flank” had been replaced in The Australian’s coverage by “conservative wing”.

Same URL, but the story had been updated with Ferguson’s knife twist scrubbed.

Perhaps The Aus doesn’t employ sub-editors on Sunday, allowing “reporters” with an axe to grind, to grind with impunity.

While it’s great to see younger people coming through the ranks of political parties (and yesterday’s winner Keith Wolahan looks to be a stellar candidate), at just 65, Andrews’ desire to serve one more term was legitimate.

Parties need a blend of wise heads and youth.

Despite being a hate figure of “progressives” (I will come back to the terminology), Andrews is a formidable intellect and policy wonk.

As the longest serving member of the House of Representatives, almost 30 years, he has the honour of being “the Father of the House”.

The left is dancing on his political grave today because he is a conservative.

Even before cancel culture became a thing, Kevin Andrews was being demonised by the “progressive” left.

In 1996 he courageously and thoughtfully led the campaign to overturn the Northern Territory’s radical euthanasia laws.

This so-called Rights of the Terminally Ill Act had resulted in several killings of people who were not terminally ill.

But evidence doesn’t matter to the “progressive” left, even when it harms people.

Andrews never shirked his advocacy for the natural family as being the gold standard to which civil society should aspire.

Without casting judgement on people for making other choices, he simply put forward the facts from social science and suggested public policy should incentivise what we know works best for children.

His 2012 book Maybe 'i Do': Modern Marriage and the Pursuit of Happiness, was lampooned by “progressives” but no one ever said why the science he presented was wrong.

It was no surprise when Andrews became one of the leading parliamentary voices for the No campaign in the fight to preserve the definition of marriage in 2017.

He spoke at many of our Coalition for Marriage rallies and for his trouble is today being derided by “progressives” as a “homophobe”.

But that’s identity politics. It you have a policy disagreement with someone on the left, you must have an irrational and bigoted phobia.

If only Australians had listened to the likes of Andrews. The degendering of marriage certainly hasn’t had “progressive” or “moderate” consequences.

Freedom of speech and Christianity is about to be further criminalised in Victoria and Joe Biden has decreed the death of women’s sports in the name of LGBTIQA+ “equality”.

The longer the rainbow political march, it’s Andrews who is looking like the true progressive.

Perhaps now you can see why Ferguson wanted to use the phrase “hard right flank” to describe him and his supporters.

It obscures the truth about what he actually stands for.

The sooner this deceptive cancel culture word game is up, the better.

Kevin Andrews will be missed in the Parliament. I’m sure he’ll continue to be an asset to the conservative cause.

No political party needs a “hard right flank”. It certainly doesn’t need a “hard left” one either.

But a “conservative wing” that stands for free, respectful and evidence-based debate is essential.