Trump has plenty of barnacles but the left underestimates him at their peril.

There’s hardly a whiff of cordite let alone a smoking gun but Donald Trump has been impeached anyway.

As a lay-person I can’t see high crimes or misdemeanour in the transcript of Trump’s phone call with Ukrainian President Volodymyr Zelensky.

Sure Trump asked Zelensky to investigate Joe Biden’s son Hunter’s business dealings in Ukraine. So what?

Even Biden the elder said Hunter’s dealings there were a bad look.

US military aid to Ukraine went ahead but the investigation into Hunter Biden’s seemingly dodgy dealings did not.

There was no hint of a threat, veiled or otherwise from Trump.

As for obstructing justice, seriously? Trump is hardly Robinson Crusoe in US Presidents who have declined to cooperate with partisan gamesmanship on Capitol Hill.

The Democrats were so eager to impeach Trump before their presidential primaries kick off in February, they didn’t bother with getting the umpire – the courts – to determine whether Trump had obstructed justice.

Where’s the “evil” in Trump Democrat congressmen like Steny Hoyer of Maryland solemnly railed against from the floor of the House? 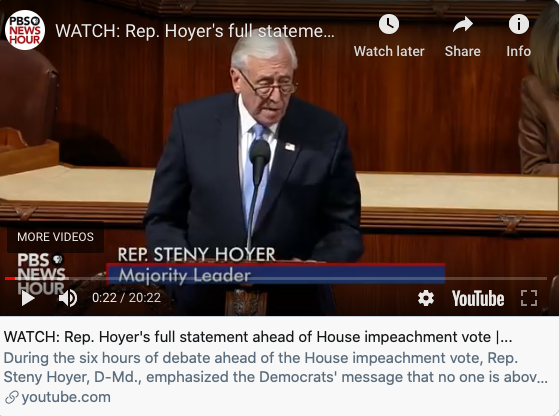 Hoyer, riffing in peak statesmen mode, thought John Locke spoke his words on the rule of law “millennia ago”. Locke died in 1704.

The faux “solemn” outrage of House Speaker Nancy Pelosi was exposed for what it was as a brief smirk rolled off the corner of her pursed lips as she slammed the gavel down after the first impeachment vote.

The impeachment fiasco has been big on theatrics but light on substance.

“It’s the vibe”, to borrow a line from the High Court case scene in the Australian movie The Castle.

The visceral hatred of Trump by the left is insane, it’s irrational.

The best one punter, whose anger made the ABC’s US correspondent David Lipson’s report, could say was that Trump locked children up in cages.

He probably sits in the White House late at night pulling the wings off flies, cheeseburger wrappers on the carpet.

Like Brexit and the 2019 Australian election, conservatives have given the left a bloody nose against the run of play.

They are rattled and determined to get things back on track, whatever it takes.

Trump called the radical Democrats out on their toxic anti-mainstream policies in his open letter, which the left dismisses as the ramblings of a madman.

Trump even called them out on their plan for taxpayer funding of abortion-on-demand all the way to birth.

Leftists would do well to read the letter carefully. They underestimate Trump at their peril.

Maybe in their unhinged anger we are witnessing the death throes of the left. But I doubt it. Totalitarian elitism dies hard.

Sure, Trump is unorthodox. He is narcissistic and egotistical. There is much not to like about him. He is coarse and his history with women has been appalling.

But so is Bill Clinton’s. There is a credible rape allegation against Clinton as there is against Trump. Clinton’s serial philandering pre, during and post-White House, in what is a sham marriage to Hillary, is legendary.

John F Kennedy was also Clintonesque in his sexual exploits in a day when there was virtually no media scrutiny of the private lives of public figures.

Apart from his affair with Marylin Monroe, he brought prostitutes into the White House. Poor Jackie.

None of this is to excuse Trump, it is just to point out the double standards of the left.

Morality in political life across the left and right is broken, and this must be addressed.

I was in Washington DC at the time of Trump’s inauguration in early 2017.

Three years on and the left still maintain Trump is a fascist and furrowed browed Democrats were today blathering on about him being a “danger to democracy”.

Full of self-righteous zeal, they feigned saving the Republic.

What they really meant is they are saving the country from dumb voters, eg Hillary Clinton’s “deplorables”, who put Trump in the White House.

It resonated with people who were sick of China taking America for a ride economically and of the open border in the south.

It is not KKK or fascist to want to keep criminals and illegal immigrants out. Love of country is not fascism and it sure beats the left’s hatred of everything western.

Far from setting off World War III, Trump has shown restraint militarily and is doing all he can to extricate American troops from places like Afghanistan and Syria.

He is one of the few politicians who does what they say they will do.

Even Clinton and Obama solemnly promised to recognise Jerusalem as Israel’s capital and move the US embassy there. They did nothing. Trump did it.

While I would have preferred a more statesman-like conservative (Reagan re-incarnated would have been good) to drain the swamp, Trump with all his barnacles has been the man.

The left’s stranglehold on Washington was so bad, something had to give. A disrupter was needed. That is why the left hate him with a hatred so intense they are blinded in their overreach.

Trump has made a great start and thanks to today, he looks assured of four more years.

Sign up to keep in touch with my political commentary.