Will we now start to take notice of what’s going on in our politics?

A statesman not known for hyperbole has identified what he calls “the biggest threat to our democratic freedoms in Australia’s entire legislative history”.

It’s a big claim and the weight of it should be allowed to sink in.

Former Deputy Prime Minister John Anderson, one of the most respected people in Australian public life, made the statement in a Tweet last month. 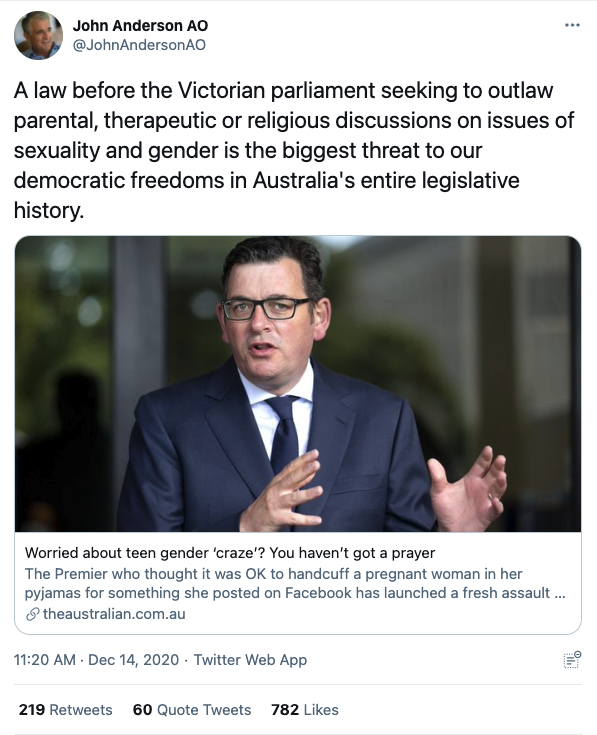 It’s been completely ignored by the mainstream media.

Anderson is referring to a bill to be debated in the Victorian Upper House next Tuesday.

The Daniel Andrews Labor Government is seeking to ban what it calls “conversion therapy”.

But in the process Andrews seeks to further criminalise freedom of speech and religion.

He will even jail anyone who prays for someone who requests prayer for gender confusion.

Yes, you heard that right. If someone asks for prayer for unwanted gender confusion or same-sex attraction, the person who responds to that request could be fined up to $200,000 or jailed for 10 years.

Even parents who gently counsel their child against radical experimental and irreversible gender treatments will be criminalised.

Such is the power of the small but radical LGBTIQA+ political movement.

Everyone, including children, must be forced into the experimental and often harmful affirmation approach to treating gender confusion.

Andrews wants to bake this in under the threat of jail.

Martyn Iles of the Australian Christian Lobby has provided an excellent summary of the detail of this extraordinary piece of legislation.

The Change or Suppression (Conversion) Practices Prohibition Bill 2020 flew through the Lower House of the Victorian Parliament last month.

Labor, sadly, has long capitulated to radical LGBTIQA+ politics. But what is beyond comprehension is that every Liberal also voted for it.

The Liberals are supposed to be the party of freedom of speech, religion and parental rights.

But this bill crushes all of that for no logical reason. It gives special powers of investigation to the so-called Equal Opportunities Commission to come after people and organisations.

And yet it passed with little debate and no political opposition.

It’s a measure of how scared and spineless Victorian politicians are in the face of the rainbow mouse that roars.

Let’s hope that when the Upper House begins debate on Tuesday some spines are grown.

There’s no way a bill like this has the support of mainstream Australia yet where are the Victorian Liberals willing to stand up for parents who don’t want Daniel Andrews putting their son in a dress?

Sadly the numbers in the Victorian Upper House do not favour the defeat of this bill, even if the Liberals do the right thing.

Further analysis can be found here from the Human Rights Law Alliance, who happen to be my lawyers in the taxpayer-funded anti-free speech case being waged against me here in Queensland by two LGBTIQA+ activists.

The Victorian legislation follows hard on the heels of similar but not quite as draconian “conversion therapy” laws recently passed in Queensland and the ACT.

Emboldened by their win in the 2017 same-sex marriage plebiscite, radical rainbow activists are stepping up their war on freedom and biology.

When someone like John Anderson says this is the biggest threat to democratic freedoms in our history, we should take notice.