Australian’s trust of politicians is somewhere slightly above bankers and used car salesmen.

Some would say this is a generous assessment.

It pains me to write this because I believe politics is a noble calling. I want to see the trust rebuilt.

For common sense conservatives, though, disillusionment runs deep.  Time after time politicians who claim to support their values let them down.

At best they are silent when the bad guys are fighting in public. At worst, ‘CINO’ politicians (Conservative In Name Only) vote the wrong way in parliament. Many times they do both.

And when they do the wrong thing, they are rewarded by the Liberal National Party’s power structures which are rigged against true conservatives.

A case in point is last week’s extraordinary intervention by Home Affairs Minister Peter Dutton to save the preselection of Turnbull cabinet minister John McVeigh. 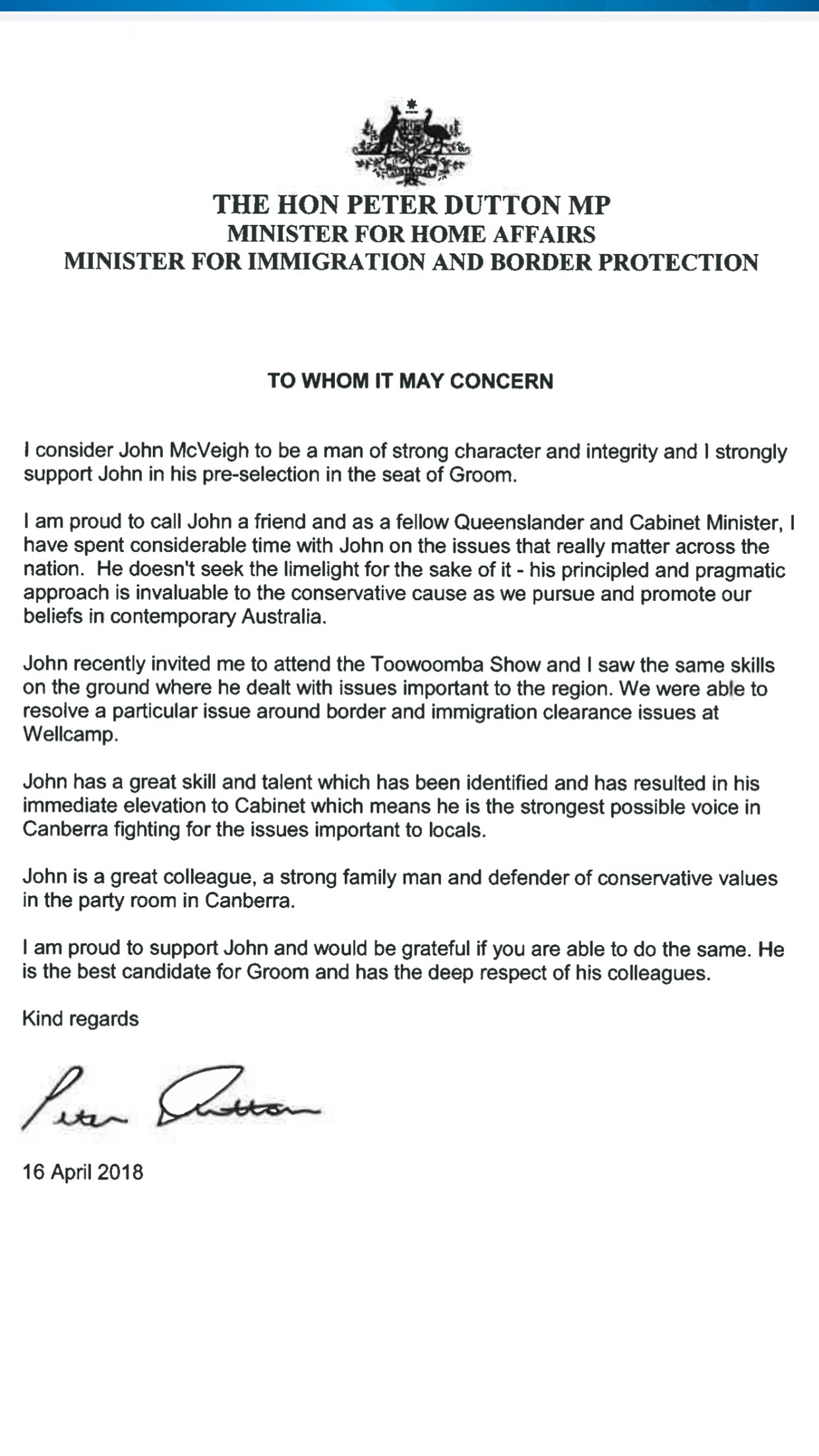 The member for the Toowoomba-based seat of Groom is in trouble because he told his preselectors in 2016 he would uphold the definition of marriage but then did the opposite on the floor of parliament in 2017.

In what was a close race against leading local social conservative and respected GP Dr David van Gend, this mattered.

A preselection promise and Queensland LNP policy on marriage were trashed. Local conservatives were shocked.

There was no disciplinary action and in fact McVeigh was rewarded with a cabinet post just days later.

Other conservatives like Tony Abbott simply abstained so that they would not thwart the majority will of the people who voted for same-sex marriage but at the same time stay true to fundamental conservative values on marriage and family.

His action so upset the local LNP conservatives in Groom that respected Toowoomba businessman Isaac Moody decided to launch a challenge to his preselection.

If the party hierarchy would not respect party policy, the locals would take matters into their own hands.

It is not everyday a Cabinet minister’s preselection is challenged and this has worried the LNP hierarchy who are circling the wagons around McVeigh.

Dutton’s letter, a copy of which has been obtained by this blog, circulated last week to party members who have a vote in the April 28 preselection.

It was a ringing endorsement of McVeigh.

But for conservatives wanting to know why they are continually done over by the LNP power-brokers, Dutton’s line that McVeigh is a “defender of conservative values in the party room in Canberra” shines light on the core problem like a LED lightbar in the bush at night.

The key words are “in the party room in Canberra”.

While the party room might have its place, conservatives are losing because their people don’t do what the Greens, Labor and the left-leaning members of the LNP do – advocate in public and put their vote in Parliament where their mouth is.

Too few conservative Liberals and Nationals fought in the postal plebiscite campaign, let alone in the preceding years when the other side was going hard in public.

Many who had led party members to believe they were true social conservatives simply ran dead when their voices were needed most.

To then have a “conservative” vote against party policy and trash the promise given to his pre-selectors was enough to cause the conservatives of Groom to go to war.

To have the Government’s leading “conservative” praising McVeigh for what happens in party games behind closed doors in Canberra where it matters little is a sad manipulation of the LNP’s conservative base.

Members of Christopher Pyne’s “black hand” movement are not in the “winners circle” because they restricted their activities to the secrecy of the party room.

They know that politics is a contest for ideas spelled out in public.

Before I joined Australian Conservatives, I thought long and hard about whether I could be more effective within the LNP, if they would have me.

I even had conversations with a couple of conservatives within their ranks.

I knew deep down it was going to be very difficult for genuine conservatives to be truly free to advocate publicly within what has become a dysfunctional power structure.

If you do the right thing in private in the party room you can be rewarded by a leading “conservative” for doing the wrong thing in the Parliament.

Watching the party hierarchy work so hard to crush the conservative revolution in Groom has only confirmed my decision to work to help Senator Cory Bernardi build a political movement that is dedicated to making our nation better.