LGBTIQ campaigners want to sexualise your children & trash their innocence

We will regret the day we opened the gate to the rainbow political movement’s agenda for sexualising children and objectifying women.

During the 2017 campaign to change the definition of marriage, the Australian public was told there would be “no consequences”.

But the latest demand of same-sex marriage campaigners is that mums and dads must now accept uncensored advertising depicting homosexual nudity.

Australians didn’t know that having their children sexualised without their permission by homosexual activists was part of the package they bought when they ticked Yes on their 2017 marriage plebiscite forms.

But the lesbian owners of the sex shop chain Honey Birdette are outraged that their latest campaign would likely be censored by the advertising standards watchdog in this era of "marriage equality".

Honey Birdette, whose objectified images of women make a mockery of the #MeToo movement in every major Australian shopping centre, is preparing a campaign for the Sydney Gay and Lesbian Mardi Gras. 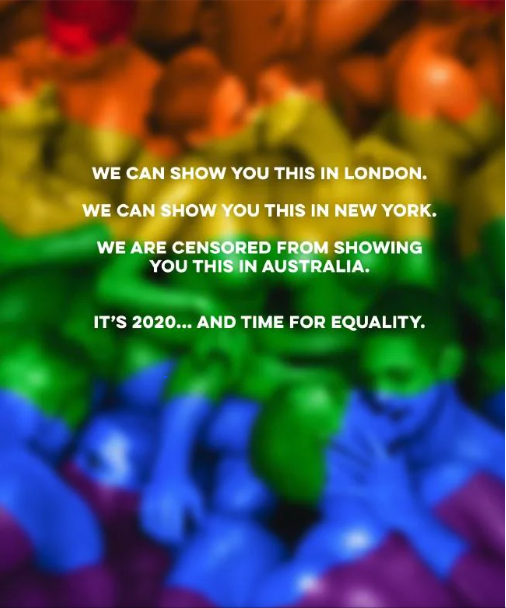 “Even though we’ve got the plebiscite (on gay marriage) through, the fact that this has to be said shows we’re not there yet and we’re a long way from being there,” said co-owner Eloise Monaghan.

If anything, the Advertising Standards Board is too lax with Honey Birdette, as any parent who has taken the kids to Westfield will tell you.

But the unrepentant Monaghan and her wife Natalie don't care what the kids see. They think their images of naked cavorting homosexuals and lesbians with rainbow coloured body paint is suitable viewing for all ages.

“Those fringe groups are really having way too much of a say with the conservative government.”

The LGBTIQ political movement and their activists in corporations like Honey Birdette are not the friends of mums and dads (read “fringe groups”) who want to protect their children from inappropriate sexual material in public.

They are not the friends of lesbians who are sick of being fetished and objectified.

But sexualising children and objectifying young women is the activists’ agenda. They will use campaigns like Honey Birdette’s in the lead-up to the Mardi Gras as a way of ramming it down the throats of mainstream Australians.

Australians unwittingly opened the gate to something sinister when they voted for marriage to be redefined.

Robbing your children of their innocence whilst sexually objectifying and fetishing women is their game plan.

Monaghan's "we're not there yet" is an ominous warning to every mum and dad trying to raise a family and to every young woman who does not want to be viewed as a sex object.

Her message is clear under the cover of the Mardi Gras. You are a bigot if you resist.