Margaret Court is owed an apology

Margaret Court is no “homophobe” and she has said nothing “hurtful”.

The words “homophobe” and “hurtful” are thrown at Christians with gay abandon, excuse the pun. 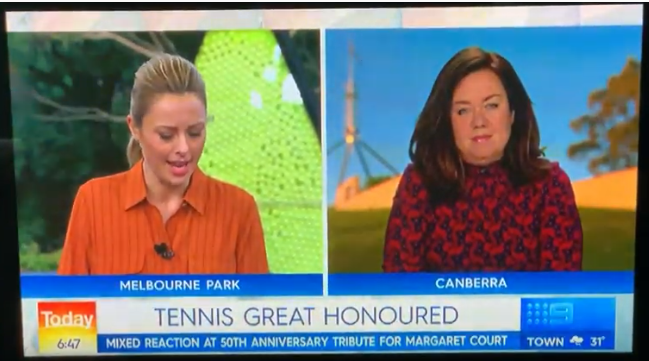 Maiden gave no examples of what Court had said to justify such serious allegations.

Now I like Samantha Maiden. She interviewed me many times on Sky news during my time at Australian Christian Lobby and during the marriage campaign.

She is genuinely nice. She is a tough but fair interviewer.

Like so many high-quality professional journalists in Canberra, my concern is that political correctness and group think obscures objectivity. And reality.

It is now part of the public discourse that Court has said “terrible things” about gay people.

But can anyone say what she has said?

She opposed the redefinition of marriage and was one of the very few high-profile Australians with the courage to speak publicly.

For this she paid a high price. She faced a barrage of unfair calls for her name to be removed from the Margaret Court Arena at Melbourne Park.

As someone who competed with pride for her nation, winning an unprecedented 24 grand slams, that must have hurt.

Almost five million Australians agreed with her when it came time to vote in the postal plebiscite. Yet she was mocked again last night by John McEnroe and Martina Navratilova as they broke Tennis Australia’s protocols to unveil a banner on court urging her name be erased.

That must have been hurtful. Their faux apologies today would have only added insult to injury.

Tennis Australia said it would "recognise but not celebrate" the 50th anniversary of Court's calendar year clean sweep of the grand slam at a special ceremony on centre court this week. What sort of cruel and unusual punishment is it to be "recognised but not celebrated"? When Rod Laver presented her with a trophy, she was not even allowed to speak. She couldn't even say thank you.

So what are Court’s crimes? It has been claimed that Court has said homosexuality is “of the devil”. This was repeated by the ABC this week without providing any evidence.

It has been claimed that Court said “trans kids were of the devil”.

But a look at what she has actually said reveals she has never said any child or person is “of the devil”.

As a Christian minister, it should come as no surprise to anyone that Court believes in the Devil. Most Christians do.

Court said in a 2017 radio interview that ideas put into the minds of children through gender fluid programs in schools that they might be trapped in the wrong body are of the Devil.

It’s worth quoting in full what she told Neil Johnson on the Christian Vision Radio network.

“But with the literature, the bullying, the stuff that’s put out today into children’s minds, I tell you what, if you haven’t got parents who bring you up that way and you’ve got parents that don’t care and you’re hurt and offended in somebody saying something to you, I tell you, a child can just start to think ‘well, maybe I am a girl’ when they’re a boy or and maybe I’m a boy and I’m a girl.

“Your thoughts — even medically they’re knowing now — the mind is a battlefield and that’s why I wrote that book Train Your Brain because the mind is, it’s all in the Bible.

“God’s got so much in there about the mind how it affects us, affects our emotions, our feelings, you can think ‘oh I’m a boy’ and it’ll affect your emotions and feelings, and everything else and so that’s all the Devil.”

She’s clearly talking about the placing of ideas into the minds of children, not saying that children suffering from gender dysphoria are “of the Devil”.

While her sentence structure is not particularly clear – and I’m the first to put my hand up for rambling in radio interviews – what she is saying, for those who have ears to hear, is quite reasonable.

There are many who don’t believe the Devil is real but for secular reasons are also concerned about children being taught their gender is fluid through compulsory LGBTIQA+ programs in schools.

Another of Court’s crimes for which she has been ridiculed was to say that “tennis is full of lesbians”.

"I mean, tennis is full of lesbians because even when I was playing there was only a couple there but those couple that lead ... took young ones into parties and things.

"And because they liked to be around heroes and what you get at the top is often what you will get right through that sport."

So what? Tennis probably is full of lesbians. Is that something lesbians are embarrassed about these days?

In January this year she preached a sermon where she raised concerns about biological males competing in women’s sports.

Again, so what? Many non-religious people are deeply concerned about transgenderism’s encroachment on women’s sports.

Many parents are worried about the LGBTIQA+ political movement’s insistence that girls share toilets and change rooms at schools with biological males who think they might be girls.

Margaret Court has been mercilessly mocked this week.

John McEnroe called her a “crazy aunt” and said her beliefs belonged in the past.

Imagine if conservatives or Christians used that kind of language? Yet McEnroe gets a leave pass from the mainstream media.

Five million Australians believe marriage is between one man and one woman. And I’d bet London to a brick that the overwhelming majority of Australians are not on-board with children being taught their gender is fluid, another key demand of the LGBTIQA+ political movement.

Yet its political demands are being forced upon us. You are a hurtful homophobe if you seek to debate these demands.

LGBTIQA+ political activists have gotten away with demonising people because it means the detail of their public policy propositions don’t have to be examined. This needs to stop.

Margaret Court’s treatment is about making an example of her so the rest of us are warned to keep our mouths shut.

She has contributed with courage and grace to a difficult public debate, sometimes from a theological perspective as a Christian minister.

Court has said nothing “hurtful” or “phobic”.

But people who have an irrational fear of her have unjustly hurt her.

To keep up with Lyle's political commentary, please sign up here.