The next "frontier" LGBTIQA+ activists boasted about in the 2017 marriage campaign is here. Warning: obscene drag queen imagery follows.

IN THE final weeks of the 2017 same-sex marriage campaign, prominent homosexual activist Benjamin Law wrote in his Quarterly Essay that redefining marriage was “far from the last frontier in the battle against homophobia”.

I’m not sure what he meant by “homophobia” because I don’t know anyone who has an irrational fear of same-sex attracted people.

I suspect it was a proxy for something else.

At the time, I wrote a response to Law which the Quarterly Essay was kind enough to publish. Looking back on it now, it is spookily prophetic.

During a speech to the National Press Club in September 2017 I also warned the Canberra Press Gallery of Law’s declaration that up-ending marriage was just the beginning for the rainbow political movement. Activists would not stop with a yes vote in the postal plebiscite.

The media were incurious; Law was never asked to explain what he meant. People voted.

Since the Marriage Act was changed, activists have doubled down on suppressing freedom of speech and ensuring gender fluid and sexualised programs for children, like “Safe Schools”, Project Rocket, Respectful Relationships and drag queen story time are rolled out nationally.

For a group of young Liberal National Party members, enough was enough.

With Brisbane City Council hosting a drag queen story time, a dozen or so University of Queensland Liberal National Club members, led by the courageous Wilson Gavin, entered a city library where the event was being held and calmly chanted “drag queens are not for kids”.

Video of their protest shows no shouting, vulgarity or storming of the building, as fake news reported.

After a vicious hate-filled LGBTIQA+-orchestrated social media pile on and the disowning of the UQ LNC by some in the LNP, Wilson sadly took his own life the next day.

The tragedy shone a spotlight on what it is the rainbow political movement is up to in our ratepayer-funded libraries and other places where children gather.

Some concerned mainstream Australian mothers passed on disturbing, shocking and obscene images from the social media accounts of those whom rainbow activists, and presumably their supporters in parliaments, think should be role models for your children and grandchildren.

I have thought long and hard about whether or not to publish these images. I apologise in advance for the offence to the sensibilities of decent people.

But the journalistic instinct in me tells me that people need to know and that sanitising the truth is not helping Australians see through the rainbow fog that envelops the eyes of most people.

Meet Dean Arcuri, a regular at local libraries and kids’ events in Melbourne and regional Victoria. He goes by the drag name “Frock Hudson”.

A concerned Melbourne mother, whose daughter was one of the first to be forced to go through the gender-bending and sexualised “Safe Schools” program, alerted me through a mutual friend of the images you are about to see.

A quick scroll through Frock Hudson’s (aka Dean Arcuri’s) Twitter account sadly reveals the images to be real.

Some are obscene and if you don’t want to see them, please exit this blog. However, I felt it necessary to publish because of the deceitful nature of the rainbow political agenda and the debauched world to which it seeks to induct children.

Here is Dean with children. 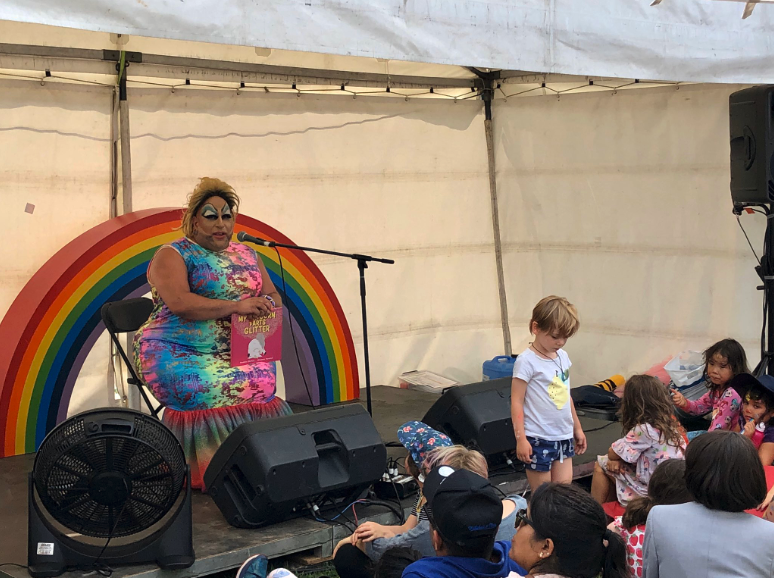 He regularly advertises with pride his interaction with children through drag queen story time events. 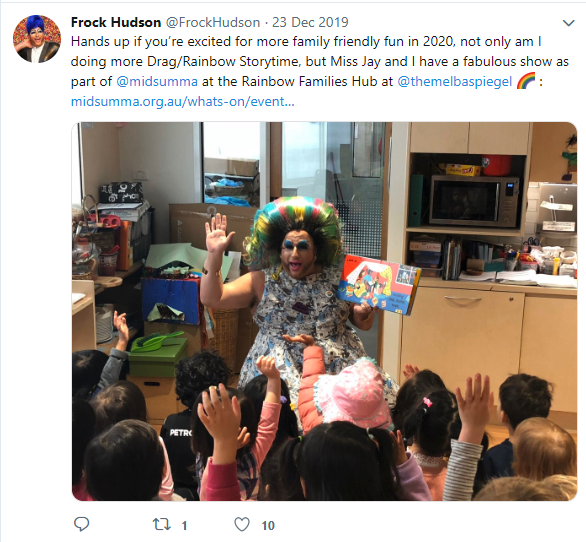 Here he is advertising, on his social media page, drag queen story time at Shepparton in Victoria. Notice he goes to great lengths to point out that he is "suitable for all ages". 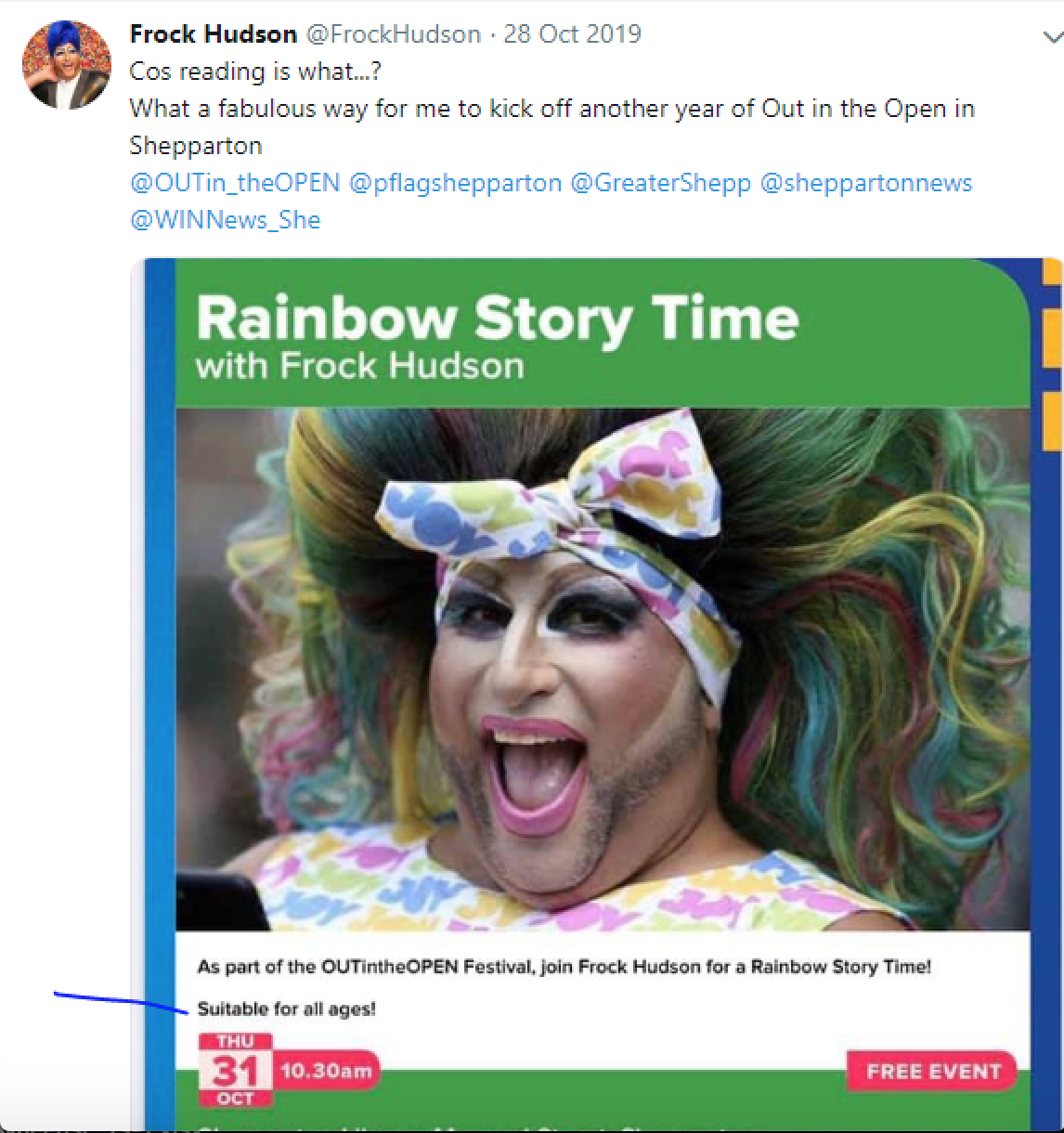 Here he is in the debauched LGBTIQA+ world to which he is seeking to induct children. Let’s hope the kiddies don’t stumble across uncle Frock’s Twitter page. 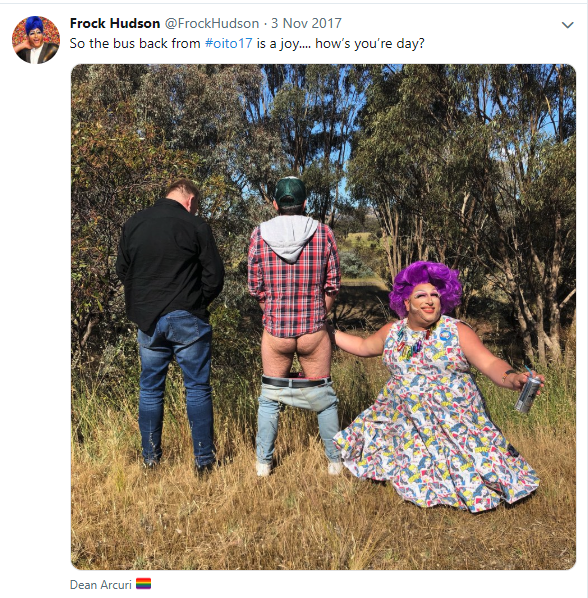 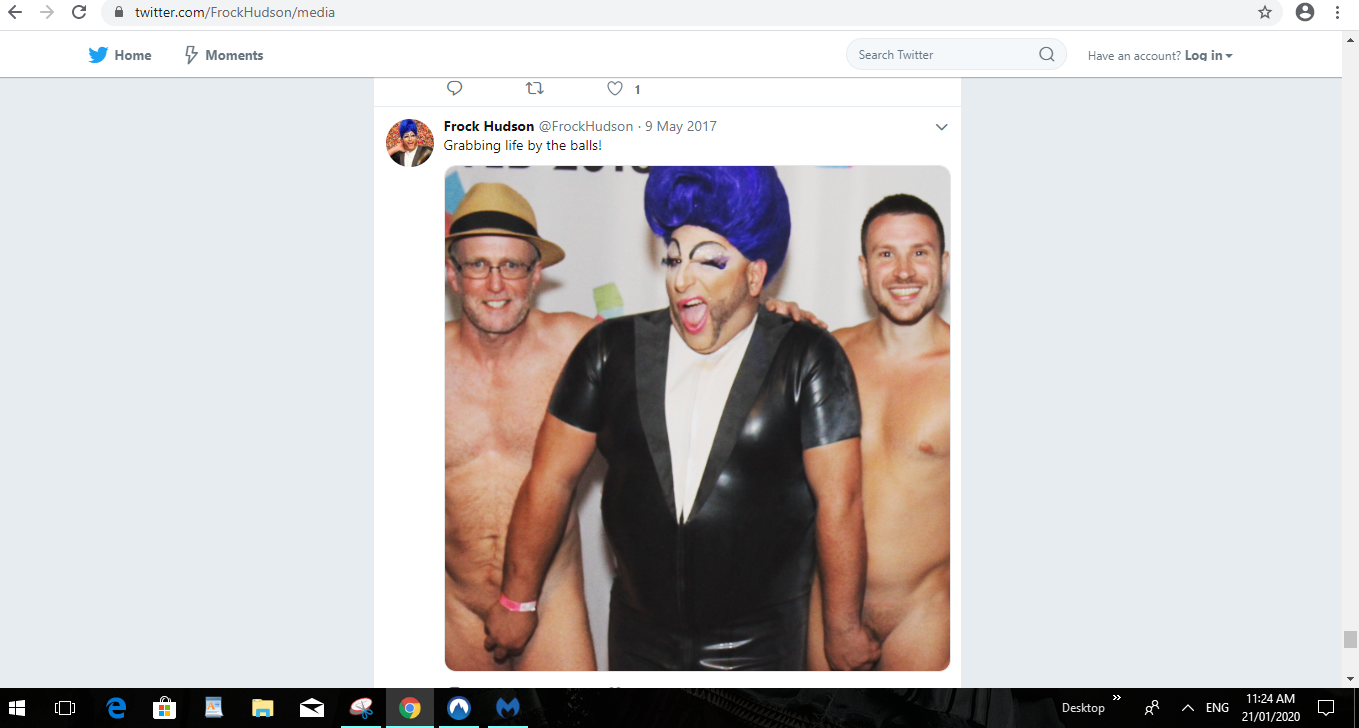 I’ll leave it to parents to be the judge of whether or not they think Dean is the sort of role model that should be indoctrinating children using LGBTIQA+-produced resources. 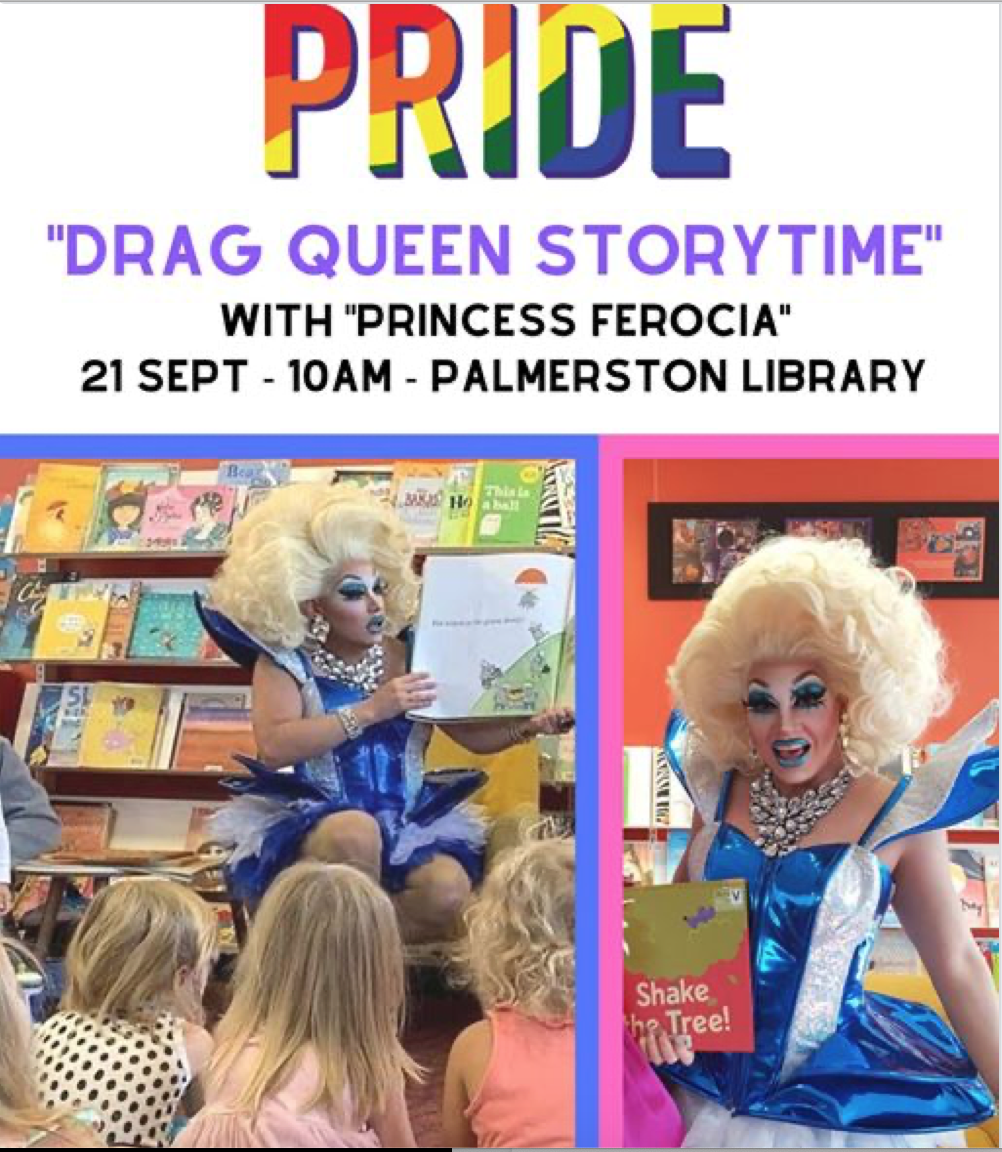 Normally, these drag queens are very careful to say that they are just reading stories. Ferocia Coutura, however, is out there about the LGBTIQA+ political agenda to capture children’s imaginations and encourage them on a journey of gender fluidity. 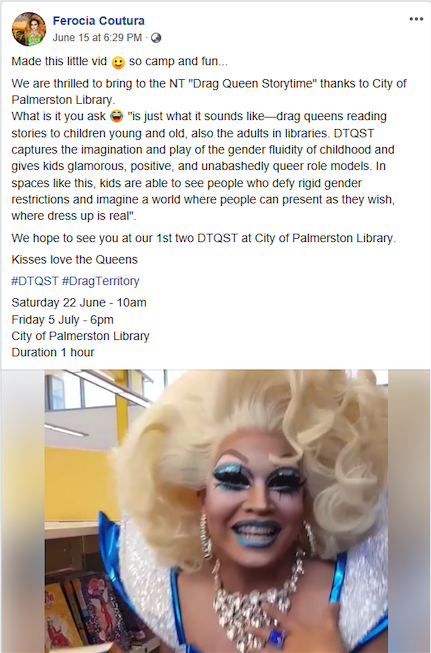 “Gender fluidity” is distinct from what most people think of as “transgenderism”. Ferocia Coutura does not believe some people are just transgender, that it is ‘just who they are’. Gender fluidity acknowledges that you can change – everyone can change – as often as they want.

Sorry Lady Ga Ga, the queer theory the kids are being inducted into these days says they are not “born this way”. Everything’s fluid. 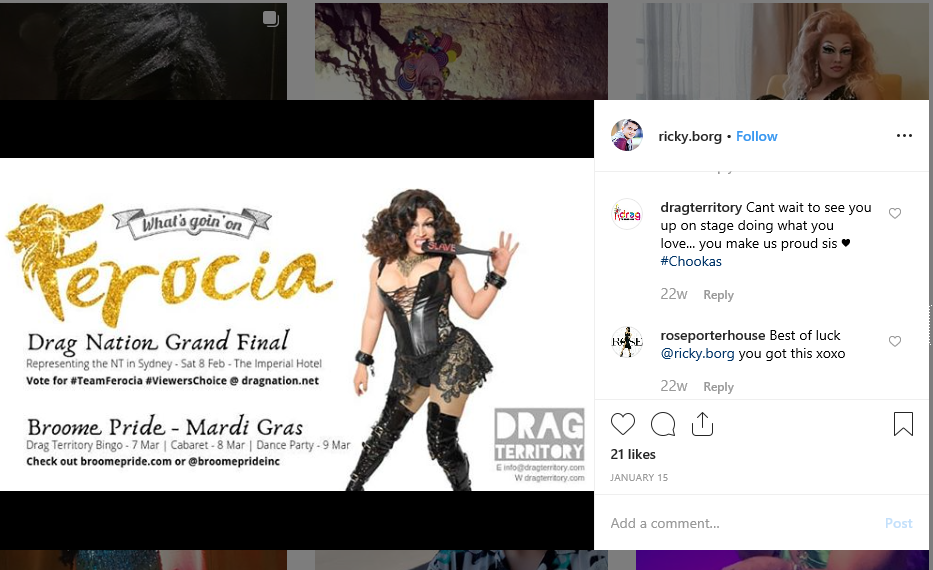 What the kids at Palmerston library are to make of this is anyone’s guess.

In Perth kids are being read to by Phillip Toia-Johntson, aka Perri-Oxide.

Here’s Phillip reading to children in Perth recently at Rabble Books and Games. 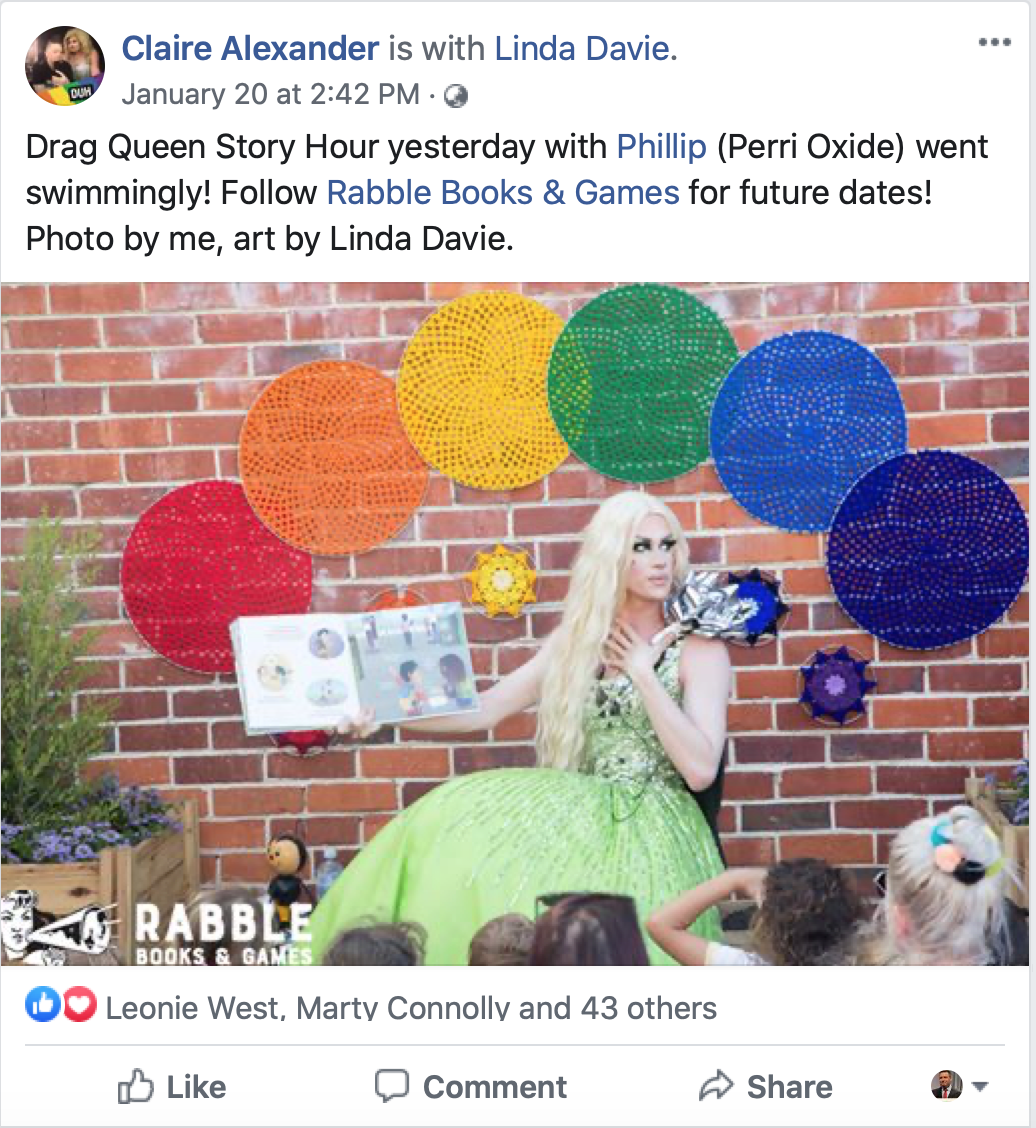 Admittedly this is a private facility but is Rabble being responsible putting Phillip, aka Perri Oxide, out there with children given what he represents in his debauched queer world? Note the simulated sexual violence (hair pulling). 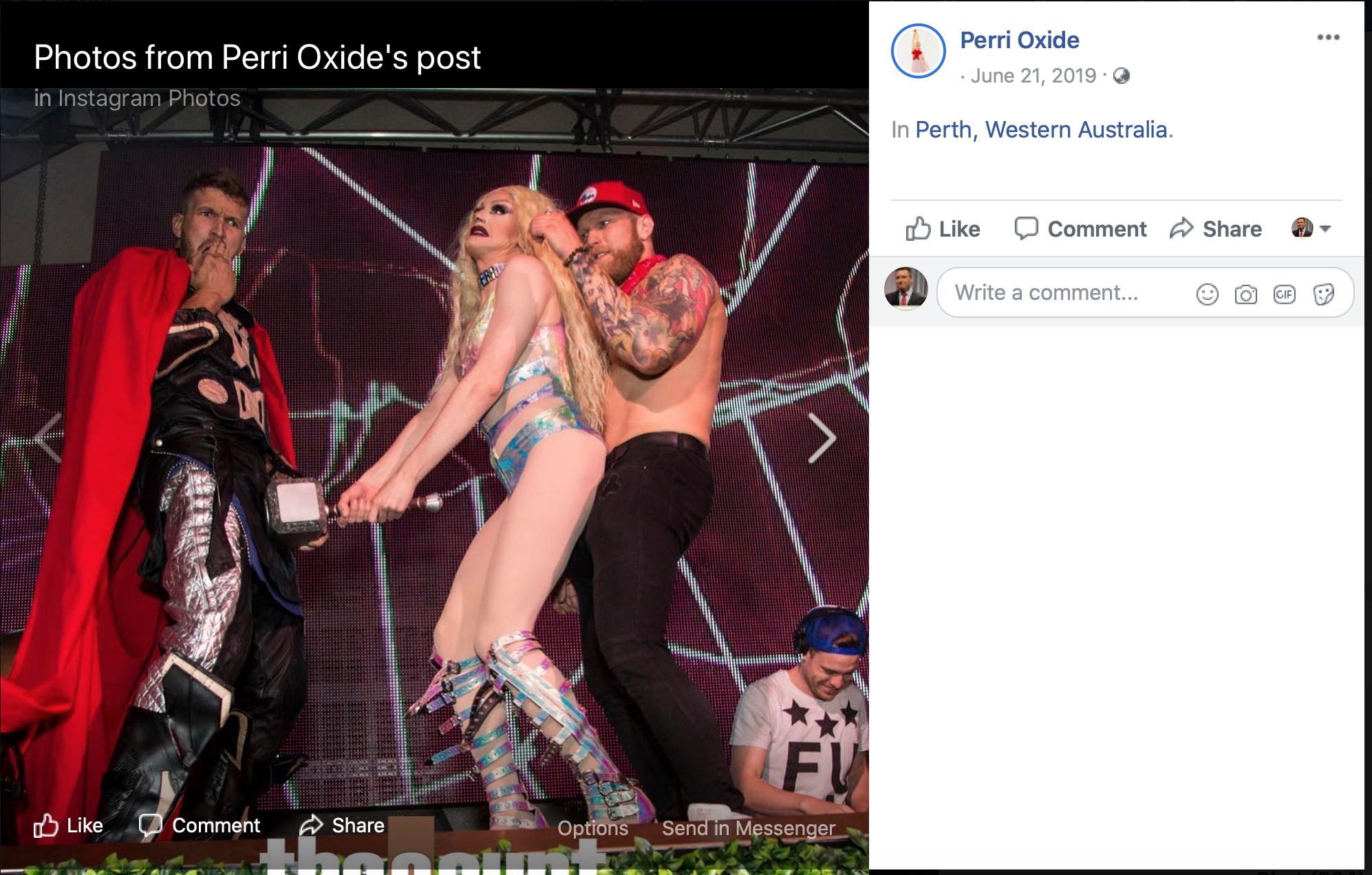 When not performing on stage or to children, Perri Oxide (aka Phillip Toia-Johnston) is promoting performances of a different kind. Again, let's hope the kids don't go exploring social media after a session at Rabble. You get the picture. 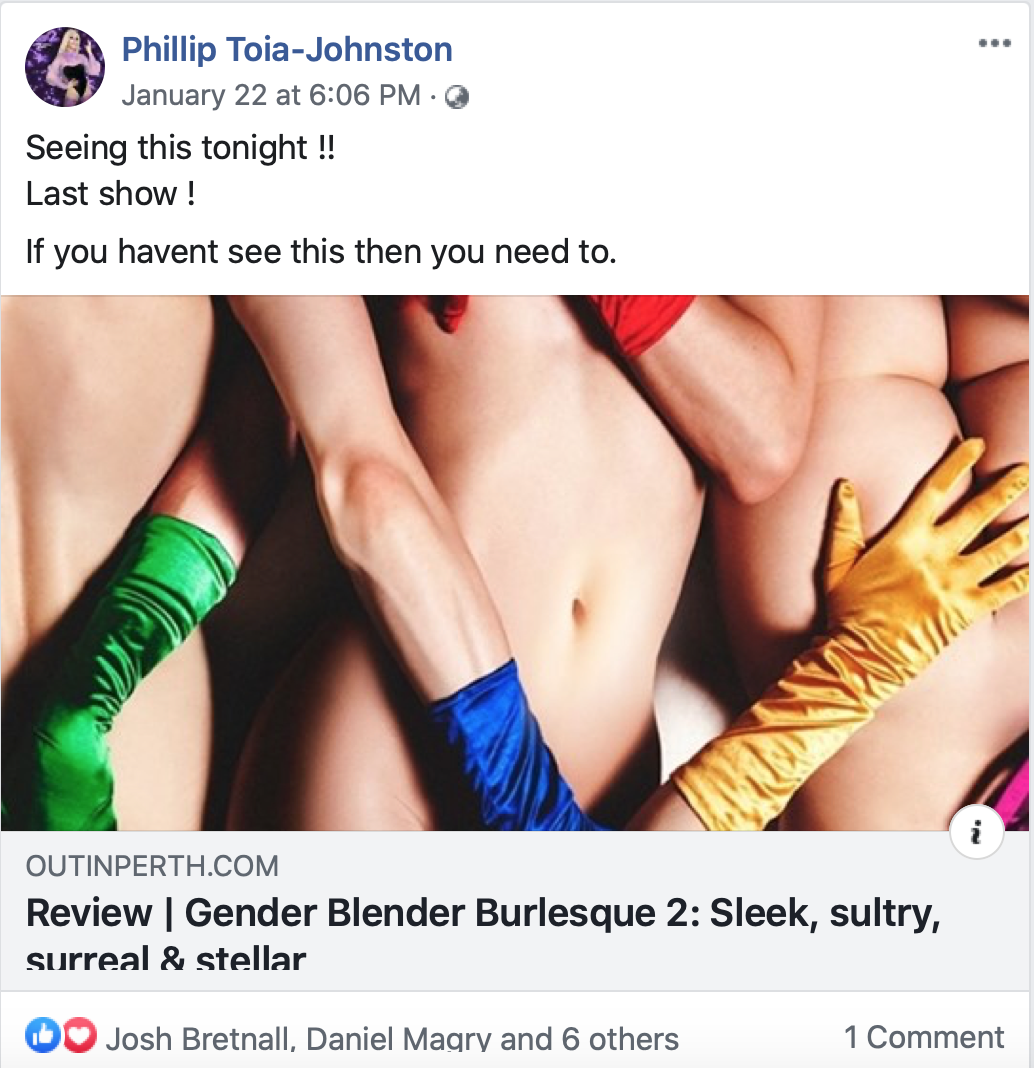 Our fourth drag queen active with children is Diamond Good-Rim.

He and fellow drag queen Jonny Valkyrie were the subject of the peaceful protest at a Brisbane City Council library two weeks ago mentioned earlier. I wrote about them last week.

Good-Rim’s name is a deliberate reference to obscene and filthy homosexual activity.

“Mummy what’s a good rim?” a child might ask. Don't answer that.

LGBTIQA+ activists are hell bent on trashing the purity and innocence of the next generation.

But it is not just the LGBTIQA+ political activists at work, they are enabled by the Queensland Labor Party.

Last year Labor invited Good Rim to a function in the Premiers' Hall on the fourth level of the annexe at Queensland Parliament House. Why would Annastacia Palaszczuk authorise the use of the Premiers' Hall for something like this? Was she there? 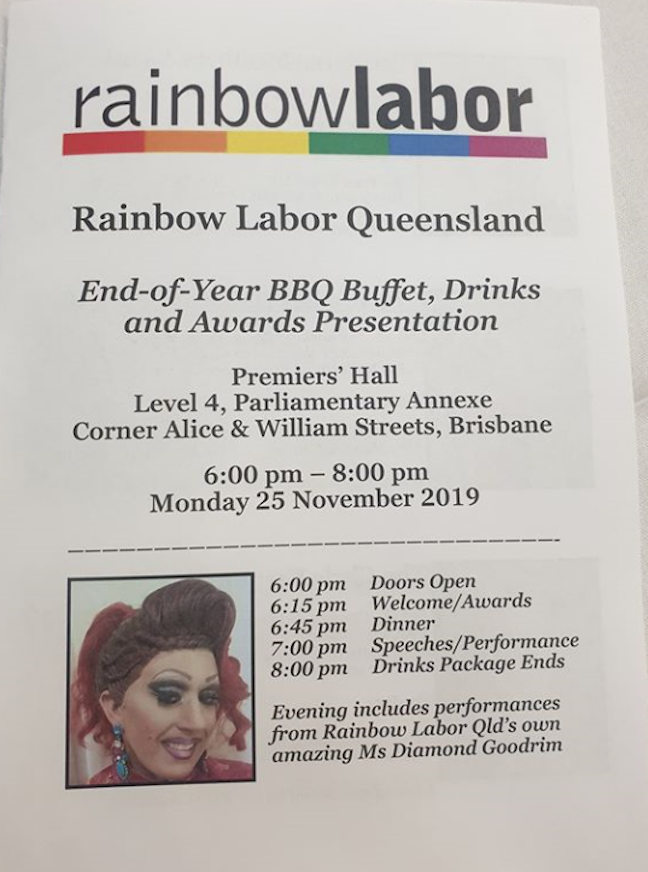 Labor has lost its moral compass and is not fit to make decisions on behalf of mainstream Queensland parents.

Let’s hope the voters wake up to this at the up-coming October election.

I have not enjoyed writing this or posting these images. But I believe people must know. Parents must know. And politicians need to do their job.

I will be accused by the LGBTIQA+ community as “hating” them. Again. I’m weary of such accusations as I know some of them are weary of my advocacy. If they can justify their agenda for kids, let’s see the arguments.

In the meantime, please be assured that I “hate” no one. I disagree with the lifestyle and public policy objectives of many people in our community, gay and straight. But disagreement is not “hate” and should not be conflated as such. But it will be, such is the lazy state of our current public discourse.

It’s easier to demonise than debate.

Like others who campaign in this space, I’m motivated by justice for children and the protection of their innocence. I’m also motivated by the right of parents to be the moral guardians of their children, something rejected by the likes of Benjamin Law, if you care to read his Quarterly Essay from 2017.

Make no mistake, the LGBTIQA+ political movement is pursuing far horizons and it is only just beginning.

If you live in Brisbane, sign the petition urging the Brisbane City Council to drop drag queen story time. Everyone should sign Binary Australia’s petition as well as well.

This is a fight none of us can afford to sit out. It is a fight that must be won.

Wilson Gavin and his courageous young Liberals and Nationals were right. Drag queens are not for kids.