Show trials, shock troops and the crushing of dissent

Show trials, shock troops and the crushing of dissent

Whenever mainstream media tell me something is as they say it is and that the conversation is closed, without providing evidence, I reserve my right to keep asking questions.

Lost amid the political farce of Donald Trump’s impeachment trial in the US Senate, is the fact that tens of millions of Americans hold serious doubts about the fairness of the November 3 Presidential election.

The made-for-television theatrics from the well of the Senate have been curated to shame anyone into ever again even thinking there were problems with the election, let alone ask questions out loud. It is an exercise in crushing dissent.

But as much as the mainstream media likes to assert it, these people are not all idiots believing “baseless conspiracy theories” or “the Big Lie”.

Hundreds of thousands of ordinary Americans turned up on an icy January 6 to protest the handling of an election which had the hallmarks of a Zimbabwean plebiscite.

A tiny percentage of protestors didn’t bother even listening to Trump’s speech at the Ellipse outside the White House.

In fact, they didn’t even attend. They were a 45-minute walk away breaching the barricades and storming the building even before Tump uttered the words “march peacefully and patriotically to the Capitol”.

How can an insurrection be incited by a speech at which the rioters were not present?

But such details don’t matter to those riven with Trump Derangement Syndrome when an opportunity to drive a stake into the heart of Dracula presents.

Since that afternoon mainstream media and cultural elites have effectively tagged anyone who agrees with Trump’s policy agenda with the stigma of “domestic terrorists”.

The inexcusable violence of a few on January 6 derailed the opportunity for a global audience to hear credible allegations in the Senate of what even Mike Pence described as irregularities and illegal activity.

“After an election with significant allegations of voting irregularities and numerous instances of officials setting aside state election law, I share the concerns of millions of Americans about the integrity of the election,” the former Vice-President said in a letter to Congress dated the day of the riot.

Was Pence fanning the “Big Lie”?

Whenever mainstream media tell me something is as they say it is and that the conversation is closed, without providing evidence, I reserve my right to keep asking questions.

Besides, in a democracy no question is ever closed, no leader is above questioning. On anything.

The alternative is totalitarianism. Are we there?

What we have been witnessing is a Soviet-style show trial complete with “struggle sessions”.

It’s self-evident that we’ve been watching a show trial Stalin would have been proud of. Kiss the ring and everything will be fine.

The “struggle session” insight comes from observations made by Steve Bannon and Raheem Kassam on the massively popular War Room Pandemic podcast.

(Before leftists set their hair on fire about me getting information from the War Room, I suggest they look carefully at the message before shooting the messengers. It’s so much easier to cancel people than engage their arguments.) 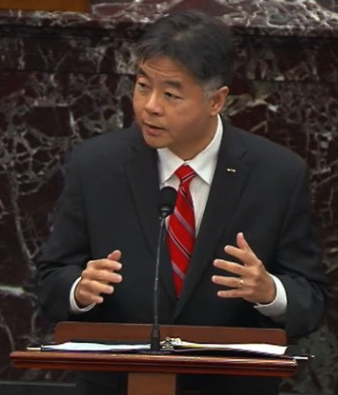 His message to Trump and his followers, while cloaked in a veneer of Senatorial civility, conveyed the same venomous message as if delivered by one of Stalin’s goons to a Russian dissident.

The gist was “just say you committed a crime against the state and everything will be allright”.

Here’s Lieu on Trump’s supposed guilt: “He does not say the one sentence that would stop future political violence. ‘The election was not stolen.’ He still hasn’t said that sentence.”

Just one sentence and the bashings will stop, is the metaphorical equivalence of Lieu’s message.

As shocking as this is, Lieu’s next sentence then gives the whole Democrat game away.

“That (Trump’s inability to concede the election was not stolen) is why National Guard troops in full body armour still patrol outside.”

Just think about that.

As Raheem Kassam said, the Democrats are admitting to using the army as shock troops for political purposes.

All because legislators need protection from Tump’s domestic terrorists.

By the way, soldiers’ social media was checked to see if they were Trump supporters before they were allowed to be deployed.

The land of the free seems to be becoming a one-party state, at least for the military and in fact for anyone else who wants to advance in polite society.

Infuriated, the elites have upped the ante and branded us “domestic terrorists”.

The aim is to make sure no one ever again says out loud what Pence called “irregularities” and the “setting aside of state election law” during a Presidential election.

Biden’s legitimacy must be protected. At all costs.

Imagine if there were irregularities or evidence that the Australian Electoral Commission had set aside the law in the conduct of an election here.

We wouldn’t put up with it. We’d “fight like hell” to get to the bottom of it.

Former Trump trade adviser, the Harvard-educated Dr Peter Navaro, has released a report detailing what he sees as evidence of fraud and irregularities.

I’ve read it and suggest you do too.

Navaro states that if even just a fraction of the alleged illegal ballots are set aside, Trump wins easily.

Clearly the allegations of fraud are not “baseless”, they are real. Can they be proven? I don’t know but they should at least be heard.

Nothing justifies political violence but frustration is understandable. Calls for investigation should be encouraged, not supressed, in a free society.

Former newspaper publisher Conrad Black writes in the Epoch Times: “…it is quite likely that more than the 45,000 votes that were required to flip to deliver Georgia, Pennsylvania, and Wisconsin to Trump could have been found if the post-election inquiries had been conducted and adjudicated thoroughly”.

Only one court in Wisconsin has actually heard evidence and Trump’s team lost in a split four-three judgement. The other cases were not heard because of standing or timing issues – probably because the courts, including the Supreme Court, did not want to become embroiled in the politics of a hotly contested US Presidential election.

My Pillow founder, Mike Lindell, paid for his own two-hour investigation and television documentary detailing what he calls “Absolute Proof” that Dominion voting machines and the Smartmatic software were hacked on election night, flipping votes from Trump to Biden.

He presents compelling evidence the machines were connected to the internet, something Dominion has claimed does not happen.

I watched Lindell’s documentary and I would not say it is “absolute proof”, but he certainly offers evidence which should not be condescendingly dismissed.

Instead of debating Lindell, the left is cancelling him. His products are being thrown out of the “big box” stores and Big Tech is using its power to supress him.

His Christian drug recovery network, which is dear to the heart of the ex-crack addict, is also being targeted.

The left don’t debate anymore, they demonise. By letting loose the armies of Hell on Lindell, the left is sending a powerful message to any other would-be dissidents. Shut up, or else.

If the Democrats, mainstream media and the Big Tech oligarchs are so sure that Biden won the election in a bigger landslide than Barak Obama, then they would not be afraid of anyone raising questions about the result.

Surely they could be easily rebutted. Not with assertions, but with evidence.

But show trials and the co-opting of the military as shock troops is not the way to heal a nation which has legitimate questions that go to the core of democratic integrity.