“You can’t get good public policy out of bad debate.” – John Anderson

“Transphobe”, “divisive,” “politically irrelevant blow-in” and someone who would not fit in is how some of my future colleagues in the New South Wales Parliament have described me.

This followed the announcement by Reverend Honourable Fred Nile that he would be retiring from the Parliament in November after 40 years and had nominated me as his successor, subject to the approval of the Christian Democratic Party’s State Council. 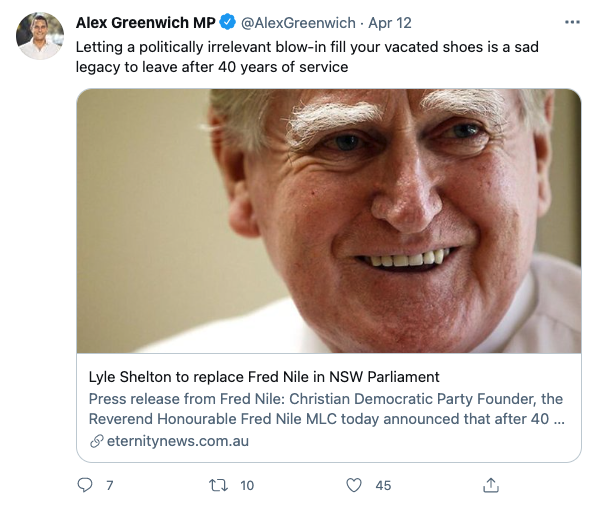 Seriously? Why would the champions of tolerance, love and diversity want to make anyone feel “completely out of place”?

And why do they assume I don’t value and celebrate people and various communities within our society?

In a democracy everyone has the right to challenge the political and public policy ideas that anyone else puts forward, but that should never mean not accepting and valuing people.

Sadly, modern identity politics, based on cultural Marxism’s critical theory, conflates the contest of ideas that used to be a hallmark of democracy with an assertion that challenging certain groups’ ideas means you have a phobia or animus towards them personally.

The practitioners of identity politics can neatly avoid debate and even shut it down (eg cancel culture) by labelling their ideological opponents as bad people.

For too long this has meant the substance of issues has not been debated, and certain propositions have found their way into laws and policies virtually without scrutiny.

No one would sign a commercial contract without scrutinising it. So why do we allow laws to be passed and policies to be introduced without proper debate and scrutiny?

Parents are waking up to the nightmare that their children are being taught at school that their gender is fluid, thanks to the aggressive march of LGBTIQA+ political activists.

Those of us who point out the harms of chemical and surgical castration and double mastectomies on gender-confused minors are labelled “transphobes” and “divisive”.

One activist, the vexatious litigator Gary Burns said the Christian constituency’s concerns about freedom of speech and religion were simply just an exercise in “poofter bashing”.

Lots of heat in these statements but no light.

It seems the prospect of a higher standard of debate has some people setting their hair on fire.

Lyle Shelton is the author of I Kid You Not – Notes from 20 Years in the Trenches of the Culture Wars. Get your copy here.