It’s a measure of how far so quickly the LGBTIQA+ child-indoctrination agenda has come that Drag Queen Story Time was not even a thing during the same-sex marriage campaign.

Had it been on the scene, the No campaign’s Coalition for Marriage, of which I was a part, would certainly have added it to the long list of consequences.

We knew that in America and the UK, immediately after winning gay marriage, the activists pivoted to teaching kids their gender was fluid.

This had mainly manifested in LGBTIQA+ school programs where parents had lost the right to say no.

The so-called “Safe Schools” program had emerged in Australia but was being pushed back by vigilant parents in all states except Victoria, where the radical leftist Premier Daniel Andrews reigned.

We quite rightly used the example of “Safe Schools” with its penis tucking, breast binding and surgery advice for children as a warning to parents that this would be unstoppable if gay marriage was legislated.

The “T” in LGBTIQA+ stands for transgender and if anyone thought marriage for the L and G would draw a line under rainbow politics they were dreaming.

My sense, and I can’t prove it, is that many Australians hoped rainbow politics would go away and simply voted Yes to try and get it out of their faces.

Of course the Yes campaign and its friends in the media (pretty much all of the media) wouldn’t have a bar of us warning that gay marriage would lead to anything else other than a wedding.

You can watch this interview on Sky News I did with Patricia Karvelas, a lesbian journalist who, during the campaign, was one of many who were crusaders for the rainbow cause. 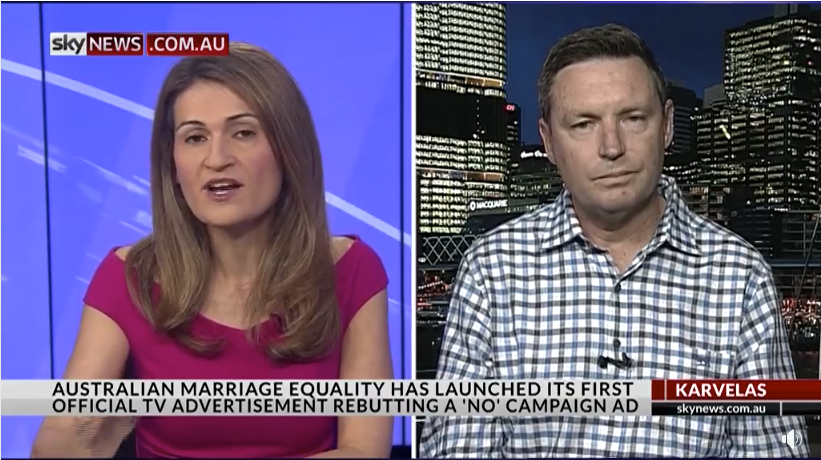 She is taking me to task for daring to say that programs like “safe schools” would become mandatory if we lost the marriage plebiscite.

This interview occurred towards the end of the campaign in 2017 and one of the last things I said was: “I don’t think parents will have any rights if we lose the gender diversity requirement in the Marriage Act”.

Remember, we didn't know about Drag Queen Story Time at that time, but the point Patricia was making stands. She was angry at the suggestion that there would be any consequence to same-sex marriage other than a happy couple.

Of course this has been proven wrong over and over again given that states like Queensland have now doubled down on gender fluid programs in schools, making them compulsory.

The Queensland Education Minister Grace Grace even admitted on Channel 9, just months after the marriage vote, that parents had to accept gender fluid resources in schools like the “Genderbread Person” because “we’ve just had the biggest debate on marriage equality”.

Karvelas' treatment of me on Sky was pretty typical of the response from the media when we said there would be consequences for the rights of parents.

That brings me to Drag Queen Story Time.

Kirralie Smith of Binary Australia has been doing great work exposing the march of transgenderism into our schools and public libraries.

She revealed this week that Newcastle City Council is hosting a drag queen who advertises graphic caps with penises on his social media, along with a host of other inappropriate content.

He’s not the only one with a social media history his rainbow political activist masters (I know you're reading this) wished he’d scrubbed before reading to tiny tots.

I have blogged about four other drag queens reading to children around the nation, arguing how inappropriate they are as role models for kids.

But if anyone was still under the illusion that the Yes campaign for so-called “marriage equality” was only ever about the love of two people, they should read the Newcastle City Council website’s reasons for promoting Drag Queen Story Time.

“Seventy-five per cent of Novocastrians voted ‘yes’ in the Federal Government’s 2017 Marriage equality plebiscite, the fifth highest vote in NSW’s federal electorates, in line with more than 7 million Australians.

“The local result was well above the state and national averages of 57.8 per cent and 61.6 per cent respectively.

“City of Newcastle first committed to marriage equality in 2015 in line with local sentiment and actively supported the 'yes' campaign in 2017, a year after unveiling a rainbow-walk in Islington Park.”

There you go mums and dads. Your kids must be subject to hypersexualised men appropriating a woman’s gender in your local library at ratepayers’ expense all because… “marriage equality”.

If only the Newcastle City Council and Grace Grace had stuck to the Yes campaign’s talking points there would have been plausible deniability.

But now the questions the media should be asking, but will not, relate to whether or not the Yes campaign extracted a Yes vote out of Australians under false pretences.

The Coalition for Marriage was not lying or scaremongering when it said parents’ rights were in the gun if same-sex marriage became law.

The brave mums who fronted our television ads, at great personal cost to themselves from the LGBTIQA+ hate merchants, are owed an apology.

Patricia Karvelas, who poo-pooed the idea that parents would lose their rights, should be the first to say sorry.

Australians were lied to about the consequences of same-sex marriage.

One can only speculate that if voters knew what we know today, whether the result might have been different.