In case anyone is confused, it is worth reminding ourselves that most of us simply have a mum and a dad.

As we approach the fourth anniversary of so-called “marriage equality”, media is reporting rates of babies deliberately denied the love of their mother are going up.

They don’t exactly describe it this way, they prefer euphemisms and slippery language designed to lull us into accepting what in truth is outrageous.

This unethical practice intentionally robs a baby of the love and nurture of his or her mother so two gay “married” men can have a child.

The Telegraph described what it called a “boom” in surrogacy in Australia thanks to gay “marriage” and poor countries clamping down on the exploitation of women through surrogacy.

It featured “surrogacy lawyer” Sarah Jefford, who herself proudly carried a baby and then gave her child to two homosexuals.

She says her business has tripled since “marriage equality”.

In 2018 (the year after marriage equality) there were 86 surrogacy babies born through IVF and I estimate there are probably another 12 or so outside of a clinic, using home insemination, so about 100 a year. Stats a few years ago were 60 babies a year. This year alone I have had 109 surrogacy arrangements so far — and I am only one lawyer. I’d estimate there are around 250 to 300 a year in Australia and about a third will end up with a baby because not all IVF is successful.

Jefford said the rates are climbing due to “marriage equality”, the pandemic closing borders and overseas countries banning surrogacy arrangements.

The article also featured a gay couple, Jon Paul Daly and Kayne Muller, posing in a photo with the surrogate mother, Sam Essex, and a baby boy (who gave these gay guys the right to assign the child’s gender?), Luca. 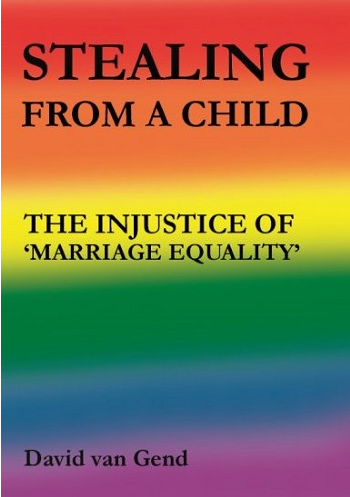 Luca was created in a test tube using an egg from an anonymous woman and Kayne’s sperm.

As a fertilised egg, Luca was then implanted into Sam’s womb to be gestated and delivered to Jon and Kayne.

This means four adults have a biological or emotional stake in Luca’s life.

In case anyone is confused, it is worth reminding ourselves that most of us simply have a mum and a dad.

Luca will most likely never know who his biological mother (the egg donor) is nor will he grow up with the day-to-day love and nurture of the woman (Sam) who gave birth to him.

He will be denied the complementarian love of his mother. For life.

And the Telegraph celebrates this as some sort of public good.

It bemoans the fact that under Australian law surrogacy must be voluntary – no money is allowed to change hands.

However, when Morrison government assistant minister Tim Wilson was a commissioner with the Australian Human Rights Commission, he released a taxpayer-funded report which advocated commercial surrogacy as a way of providing “equality” for gay “married” men.

The idea of women’s wombs for hire and a commercial market in human babies should be repulsive to every Australian.

It’s bad enough that we have stumbled into the stealing of motherhood  and fatherhood (the Telegraph didn’t mention rising rates of sperm donation so lesbians can acquire children) from children as a consequence of “marriage equality”.

My friend Dr David van Gend did warn of all this in his excellent 2017 book Stealing from a Child – The Injustice of Marriage Equality.

Lyle Shelton is Director of Campaigns and Communications for the Christian Democratic Party. During the 2017 same-sex marriage plebiscite, Lyle was a spokesperson for the Coalition for Marriage. To keep in touch with Lyle and the CDP, sign up here.