Franklin Graham is copping it now, but you will be next

It’s “a shame that the federal government has left us in the position of having to accept charity from such bigots”. – New York state Senator Brad Hoylman

Franklin Graham is a living treasure, in my books.

My wife Wendy and I had the privilege of hearing him preach at the Riverstage in Brisbane on a balmy February evening last year.

Like his late dad, Billy, the greatest Christian evangelist of the 20th century, he speaks the Gospel truth with clarity and persuasion.

Yes, he speaks about sin. That’s what faithful preachers always do. They challenge us firstly to focus on our inner selves and then our wider society’s ills. They present the love of Jesus as the antidote.

Current cultural issues like our killing of unborn babies and our redefinition of marriage were mentioned.

These issues in particular, challenge politicians and the cultural left who have gone out of their way to baptise these practices into our laws. In their eyes, there should be no guilt, even though abortion kills unborn children and wounds mothers and genderless marriage robs children of a natural parent. 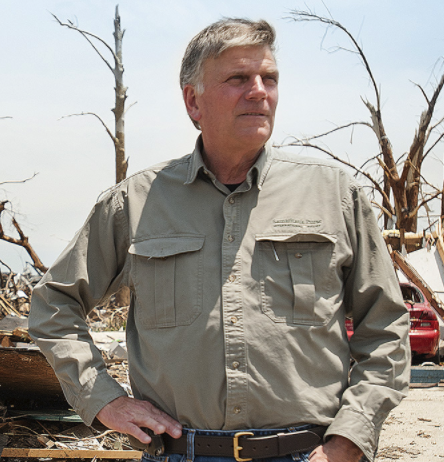 Good preachers speak the truth to power with love and grace and that was certainly Franklin’s tone that night.

He took no collection, even though there were thousands of people there who had been treated to free entry and a high-quality music show before he took the stage.

At almost every major global human tragedy in the past 50 years, Samaritan’s Purse has been on hand with planeloads of relief. Literally.

While watching the news last week I saw a report of a field hospital being set up in Central Park, New York City, to help with the Covid-19 pandemic where the city’s hospitals are overwhelmed.

I'm sure like me, you too have been moved to see refrigerated trucks outside hospitals ready to be loaded with dead bodies because the morgues were full. People have been told to source cardboard coffins because they burn quicker in the crematorium than wooden ones.

Blurred on the side of one of the tents in the background vision of the reporter’s interview was a logo I thought I recognised.

Channel 9 made no mention of the organisation behind the field hospital it was reporting on, a journalistic oversight for which a cadet would normally be reprimanded.

The next day while surfing social media there it was. Samaritan’s Purse was the Good Samaritan filling probably New York City’s greatest need right now.

Suddenly New York Mayor Bill de Blasio, under pressure from gay activists, was all over the media suggesting that a field hospital run by Christians might be selective in who it treats.

Rainbow activists can’t even give their war against Christianity a rest when in the middle of a plague, Christians do what they have done since the days of the Roman plagues, run to help all who are in need.

One of the reasons Christianity flourished and overcame Rome within 400 years was because when everyone else headed for the hills in the wake of pestilence, Christians stayed and cared for the sick, usually dying with them.

The gay lobby’s insinuation that Christians running a field hospital would discriminate against people is actually quite pernicious. It needs to be called out for what it is - anti-Christian bigotry.

Samaritan’s Purse’s assurances that discrimination would not even enter their minds didn’t stop a spooked de Blasio from sending city council monitors to the park to check that Graham’s Christians were not leaving coronavirus-infected gays lying gasping for breath in the East Meadow.

NBC News reported the story as if something terrible had befallen the New York gay community.

NBC went on to list Graham’s “anti-gay” and “anti-trans” sins.

Let’s take a look at the rap sheet NBC presents.

“We believe God’s plan for human sexuality is to be expressed only within the context of marriage, that God created man and woman as unique biological persons made to complete each other,” item nine of Samaritan's Purse statement of faith reads.

“God instituted monogamous marriage between male and female as the foundation of the family and the basic structure of human society. For this reason, we believe that marriage is exclusively the union of one genetic male and one genetic female.”

NBC lays the statement of faith out as if it was the smoking gun, proving Graham’s intolerable bigotry.

Seriously? Is it now “hate” and “bigotry” for a Christian organisation to state beliefs which have been uncontroversial for thousands of years?

The statement of faith is not a criteria for who gets treatment or not (more heterosexuals than gays would be in trouble if it was), it is a statement of the organisation’s beliefs and the standards to which its staff and volunteers hold to.

Earlier in the week a New York state Senator, Brad Hoylman, weighed in (pictured below, centre, with his "husband" David Sigal and one of two daughters they are raising). 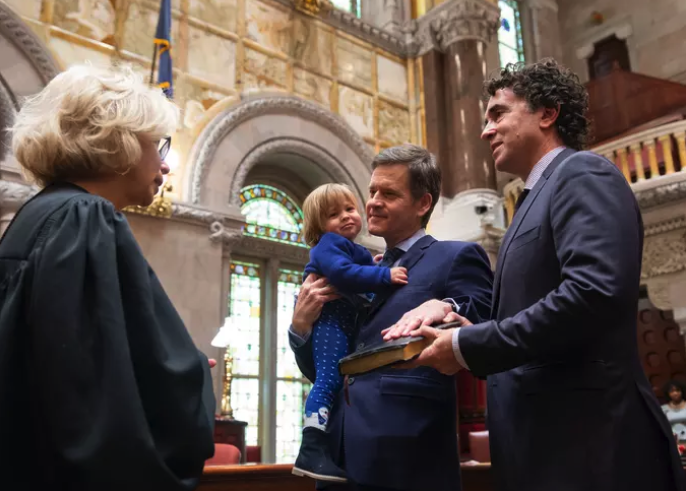 He called on Graham “to publicly assure LGBTQ New Yorkers that they will receive the same treatment as anyone else at the Central Park field hospital.”

Of course they would, Graham said. That was never in doubt.

Hoylman told NBC News that it’s “a shame that the federal government has left us in the position of having to accept charity from such bigots”.

Hoylman went on to say: “This is a man, after all, who has said that the LGBTQ community recruits children, he’s said that families like mine are invalid, he compares the transgender community to paedophiles and perverts, so I think it would behoove us to watch him and his followers’ actions extremely closely.”

Let’s just take a look at these claims.

Does the LGBTIQA+ political movement recruit children? Anyone who has seen Australian gender fluid programs like “safe schools” and “respectful relationships” now compulsory in many Australian states would have no doubt that this is the aim. So Graham is right about that and most parents, Christian or not, would share his concerns.

Anyone who has seen the likes of drag queens like “Diamond Goodrim” (a homosexual reference to the anus) reading to children in Brisbane libraries could be in no doubt about the child-recruitment aims of this movement.

I don’t know if Graham has ever compared the transgender community to paedophiles, I doubt it, but their activists certainly have advocates for paedophilia in their ranks.

There is a big ethical debate about whether or not it is right for children to be denied their mother or father so two people of the same sex can have a family. Mainstream parents are concerned about gender fluid ideology being imposed on their kids at school.

Graham’s views really are not radical at all, yet he is being demonised for speaking in favour of children’s and parents' rights against the demands of the rainbow lobby.

They want to shut his field hospital down.

No wonder outlets like NBC, who are the mouthpieces of the true radicals like Hoylman, are regarded by mainstream people as purveyors of “fake news”.

But unless cultural left's demonisation of people like Graham stops, you are next.