My speech at the Sydney launch of I Kid You Not – Notes from 20 Years in the Trenches of the Culture Wars, NSW Parliament Theatrette, Friday April 16, 2021.

It’s an honour and a privilege to be here and to have been asked to succeed Rev Nile.

I’m looking forward to getting to know you all and to becoming part of this wonderful party that for more than 40 years has been a beacon of truth and common-sense here in NSW but which has also reverberated around the nation. 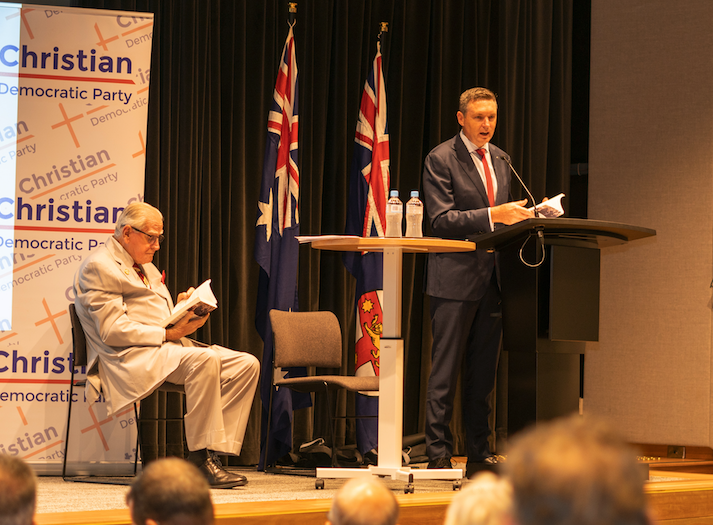 Since I was a teenager, I have admired Rev Nile’s courage in standing up for Christ’s values in public. Who would have thought so much irrational vitriol and bile could be poured out on one man simply for standing up for the Christian and Western vision for family and marriage?

Twenty years ago I read Fred’s autobiography and found it very inspiring. Until then all I knew of Fred was the media caricature but in his book I learned of his military service and involvement in organising the 1968 Billy Graham Crusade.

History will show that Rev Nile and the CDP have been right on so many issues.

Take the current national discussion on “rape culture” emanating from the revelations of despicable behaviour in Parliament House, and sadly even from this place.

Now objectifying women is becoming more and more socially unacceptable – as it should be. Fred, you were right.

I won’t mention the disgraceful acts committed by some gay Liberal Party staffers inside Parliament House on the desks of their female members of Parliament, but they were widely reported in the media over the past few weeks.

It prompted me to ask this question: Why when we celebrate the values of sexual libertarianism publicly in the streets of Sydney each year are we surprised when individuals act out those same values privately in offices inside Parliament House Canberra?

Fred, your campaigning against the Mardi Gras and FOR the truth about human flourishing is slowly being vindicated by a society which is looking for greater meaning and purpose in its interpersonal relationships.

A month ago, I did not envisage standing here on the cusp of moving to Sydney to join the CDP.

While I had had the privilege of spending time with Fred and Silvana at various functions and conferences over the years, we re-connected at a little church at Tumbulgum in northern NSW last December.

In fact, my wife Wendy and I almost didn’t make it that Sunday morning. I was due to preach and Fred and Annie were speaking in the afternoon to promote the film “Like him or Loathe him” the Fred Nile documentary.

It was pouring rain as we drove over the border and the Tweed River was in flood. We were almost at Tumbulgum when we were forced to stop because of water over the road.

I phoned pastor Rob Stuttle of Living Waters Church and said that I thought we needed to turn back.

Using his local knowledge he suggested another route over some higher ground.

The upshot of that was we were able to meet up and enjoy lunch together. Fred and Annie bought my book. Books can be dangerous as they spread dangerous ideas.

The next contact we had was a phone call from Annie about a month ago where she said that she, Fred and Silvana wanted to see me and could I come to Sydney.

The flood had almost stopped us meeting that day but I think God had other plans.

We are all here today because we are deeply concerned about the direction of our nation.

That’s why I, like you, have been in the trenches of the culture wars these past 20 years.

After the 2017 marriage campaign I felt a strong desire to move into party politics. Knowing ACL was in very capable hands, I resigned after 10 years of service there and joined Cory Bernardi’s Australian Conservatives.

Running for the Senate in Queensland in the 2019 election was a great experience but it was not successful.

I had some time on my hands afterward and I felt the Lord say “do what’s in your hand”.

So I wrote this book, which is something I’ve wanted to do for many years.

As Miranda Devine says in her lovely endorsement: “these are tales from the frontline of the culture wars that will set your hair on fire”.

Well maybe not your hair, but the culture wars certainly resulted in my office being set on fire.

The book begins with the telling of the story of how the ACL’s Canberra headquarters was firebombed by a same-sex marriage political activist just days before Christmas 2016.

What’s deeply concerning to me to this day is that the Australian Federal Police maintain that there was no political, religious or ideological motivation for the attack.

The book reveals a different story.

I cover my early days as a young, elected Councillor on the Toowoomba City Council.

I campaigned against legal brothels being set up in our city and against so-called adult entertainment.

This prompted one of my enemies on council to go on our local Win Television and say “Who does Lyle Shelton think he is? The Fred Nile of Toowoomba?”

Most of the book is a chronicle of failed campaigns but one that I was involved in where we won had to do with a scheme to force Toowoomba citizens to drink recycled sewage water.

At the time Tim Flannery was going around saying that climate change meant dams would never fill again.

We had a referendum and I campaigned against experimenting with this untested technology and making our citizens guinea pigs.

At the time Sydney was experiencing its own water supply crisis and Premier Morris Iemma told the media there were unresolved health issues with drinking recycled sewage water.

I’ve quoted him in the book.

I included this chapter because I wanted people to see that activists like me, who are perceived in a certain way, care about the common good beyond what are stereotypically labelled as “moral issues”.

Deceiving a community about a water supply scheme is a moral issue because truth in politics matters.

Like all of us here today, I’m especially passionate about human rights for the unborn.

In my early years at ACL a courageous Liberal Senator by the name of Guy Barnett moved a motion to disallow Medical funding of late-term abortion.

This sparked a Senate inquiry and ACL was asked to help make the case for removing the taxpaying funding of the killing of unborn babies in the later stages of pregnancy.

We helped fund the visit to Australia of Gianna Jessen, a survivor of late term abortion.

If abortion is a woman’s rights issue, what were mine?

The book covers euthanasia, indigenous reconciliation and much more.

It tells the stories the mainstream media and incurious journalist ignore.

I chart the rise of the so called “Safe Schools” program whose gender fluid ideology is now being taught in schools all around the country.

The chapter in the book is called “Unsafe Schools” – a phrase I stole from Rev Nile after hearing him call it that in a television interview.

I was only going to write one chapter on the 2017 marriage plebiscite but I ended up writing three.

There are a number of war stories from the campaign but a brief one I tell is the day Rev Nile and I were speaking at a marriage rally outside the ACT Legislative Assembly.

As Fred was speaking a rowdy mob of rainbow flag waving activists stormed through our audience and crashed on to the stage, literally yelling in Fred’s face.

He stood there and took it gracefully. The police did nothing.

I reckon if a group of Christians crashed the stage of a gay marriage rally, the police would not stand by.

This book is a lament about things that should not be.

It is also a lament about the lack of leadership and courageous voices in the church and politics.

In his 1974 lecture at Harvard University, Alexander Solzhenitsyn said the West had lost the “will and the courage” to defend itself from the radical left.

That was almost 50 years ago and things have gotten worse.

My book is an appeal to the church and to Christian leaders to take up the fight.

As Dietrich Bonhoeffer, one of the few Germans to defy the Nazis, said: “Silence in the face of evil is evil itself, not to speak is to speak, not to act is to act. God will not hold us guiltless”.

The culture wars are real.

Real unborn children are being killed and their mothers are being harmed.

Children are being chemically and surgically castrated as a result of LGBTIQA+ gender fluid ideology being spread in their schools like a coronavirus.

Freedom of speech and freedom of religion, two of the most precious human rights after the right to life, are under cultural and legal pressure in today’s Australia.

Who would ever have thought this could happen?

One of my favourite theologians is the late Anglican John Stott.

In his 1980s book, Issues Facing Christians Today, he wrote a chapter about politics titled “Involvement, is it our concern?”

Fred knew that more than 40 years ago when he ran for parliament.

The things he has stood for have been motivated by love of neighbour.

I really enjoyed writing this book and exposing the lies of those who war against the truth.

I feel very pleased to be joining a group of people who have been committed to bringing the truth into the heart of this Parliament and beyond into our nation for more than 40 years.

It is my hope that the opportunity you have all given me to join you will provide a sequel to this book over time that will chronicle, instead of failures, some great victories for Christ’s truth here in NSW and in our nation.

Get your copy of I Kid You Not – Notes from 20 Years in the Trenches of the Culture Wars. Order online here.