Libs, Nats and the politics of net zero courage

Libs, Nats and the politics of net zero courage

Just as in the same-sex marriage debate, the Coalition’s capitulation on net zero came swiftly.

Like marriage, the Liberals and Nationals promised for years they would fight.

They said they would never give in but they did.

Now Labor and Liberal are on a social and economic policy unity ticket.

As we’ve seen time and time again, globalist elite opinion and mainstream media barracking is too strong for the Liberals and the Nationals.

Whenever will and courage is required, conservative politicians cave.

Labor and Greens don’t need courage because they don’t understand, or don’t care about, the consequences. Will to power is all.

The best explanation Deputy Prime Minister and Nationals Leader Barnaby Joyce could give was it is better to be inside the tent.

The trouble with politics is that silence is the price you pay for being one of the cool kids.

We won’t see what Barnaby does behind closed doors and he won’t be able to talk about it afterwards.

Countries further down the de-carbonisation path, like the UK, are experiencing an energy shortage because of a wind drought and high gas prices.

How will going to Glasgow this week make life better for Australians?

As Greens leader Adam Bandt pointed out in Parliament today, the Glasgow crowd have already moved beyond net zero by 2050.

They demand a reduction of 74 percent of our emissions by 2030 – in just nine years. 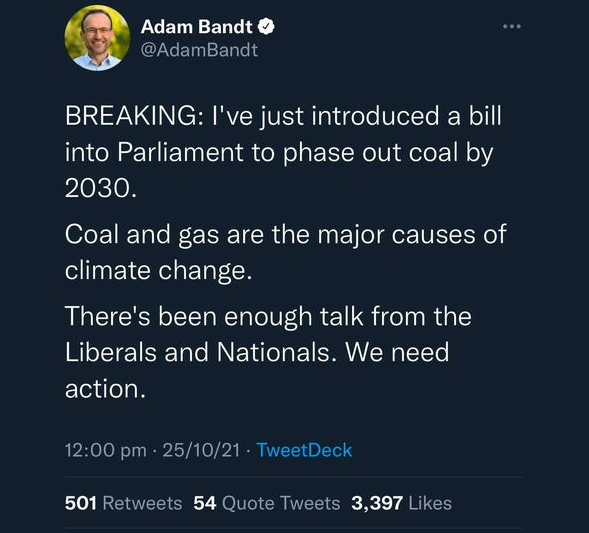 Nothing we do to hurt ourselves will satisfy them.

Did I mention the Greens also led the same-sex marriage debate for years with the same legislative and media tactics? Like now, no one took them seriously until it was too late.

Once achieved, they didn’t stop at redefining marriage. Now they want taxpayer-funded sex change operations for your kids without your permission.

But Bandt doesn’t care in the same way he doesn’t care if we don’t have baseload electricity in nine years’ time. Ideology trumps evidence.

Already the UN is telling us we will have to cut meat consumption to save the planet.

One thing we do know is that every development project post Glasgow will have the net zero ruler run over it.

This will be an expensive handbrake on new dams, farms, mines and energy intensive manufacturing.

Anything that creates wealth and jobs will have unnecessary lead in its saddle bags.

We’ve been told we have no choice because the whole world is moving to a “new energy economy”.

They said the whole world was moving to redefine marriage. We’d be a pariah state.

There is no renewable technology that can provide base-load electricity apart from hydro and we live on the driest continent.

Net zero is about as nutty as a bloke giving birth but to be part of polite society we must pretend it is real and restructure reality to accommodate it.

Couldn’t we have just stood apart from the crowd? Couldn’t the government have just levelled with the Australian people instead of being driven by the polls which ask people loaded questions about immanent climate catastrophes?

Surely if Australians knew that net zero was a slogan with a very high and unrealistic price tag, the polls would be different.

If only they knew that the polar bears are fine and so is the reef.

But sadly, like so many of the other debates being pushed by the radical left, conservative politicians are as absent as the truth.

Watching the Liberals and Nationals roll over to net zero is almost identical to watching them when they rolled over on same-sex marriage.

There was faux global momentum in other woke nations. There were trite slogans and parliamentary theatrics but no debate about consequences.

Now we have genderfluid ideology being taught to children, free speech quashed and Morrison government ministers who support commercial surrogacy so two blokes can acquire children.

The consequences of net zero will be a stronger China because the Communist Part is not as stupid as us, the harming of regional economies and expensive and unreliable electricity for everyone.

It is not a conspiracy theory to say that the radical left’s economic and social policy agenda is being driven through unelected global forums like the UN’s COP26.

It’s just how it works these days.

We are a sovereign nation and we should value that. It should not be surrendered because global elites decree it.

In both cases, the will and courage of good people folded.