Today's media cycle will be all about Tony Abbott's call for Australia to withdraw from the Paris emissions agreement. Cory Bernardi is the only Australian parliamentarian who has been consistent while the LNP tears itself apart trying to walk both sides of the politically correct fence.

While the LNP in southern Queensland has announced a policy for a “future without coal” the LNP in North Queensland is campaigning for a coal-fired power station.

Campaign pictures obtained by the Conservative Party show the LNP in North Queensland campaigning for a coal-fired power station while in Brisbane and Canberra its policy is for renewables. 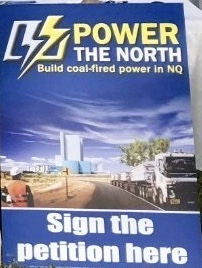 "There is no integrity in the LNP accepting plaudits from the green-left GetUp! group for its anti-coal stance in Brisbane while campaigning for coal-fired power in North Queensland," Mr Shelton said.

And with Tony Abbott now joining Conservative Party Leader Cory Bernardi’s 18-month-old call for Australia to withdraw from the Paris emissions agreement and the federal Nationals calling for three coal-fired power stations to be ‘bolted on’ to the so-called National Energy Guarantee, Coalition policy on electricity prices was in disarray.

“Mr Abbott will be attacked today by the Government and cultural elites for belling the cat on the NEG’s inability to bring electricity prices down and drive reliability up.

“The Nationals’ ‘bolt-on’ to the NEG will only create a camel and lead to further market distortions while ever Australia is chained to Paris.

“The only way to change the Turnbull Government’s approach to Paris and drive electricity prices down is to elect Conservative Party Senators at the next election,” Mr Shelton said.

“The only way to keep our power on is to turn some of their power off – in the Senate.

“Sadly the Coalition won’t listen to its own dwindling number of conservatives but it will listen to a conservative voter revolution. It’s the only language the LNP ‘winners’ circle’ power-brokers understand,” Mr Shelton said.