The gods must be angry

The UN is using Greta to sell what Labor could not.

I just want to hug Greta Thunberg and tell her everything will be okay. The world will not end in 2030.

Her white-hot sulphurous anger burns because she says politicians are not doing enough to stop climate change.

“How dare you?” Thunberg thundered at the UN Climate Action Summit in New York yesterday.

But what more does the 16-year-old child prophetess want countries like Australia to do?

When will enough be enough?

Are her predictions of immanent catastrophe true?

Her grown-up mentors at the UN are shamelessly using her to shame countries like Australia into doing even more to try and dial down the temperature of the planet.

But at what cost?

“Climate action” policies have already contributed massively to the doubling of our electricity bills.

Every Australian is hurting, particularly those on low incomes and those running small businesses.

We have closed 12 coal-fired power stations without replacing their base-load electricity-generating capacity and we wonder why the lights are going out – literally.

Tens of billions of dollars of taxpayer-funded renewable energy has vandalised our electricity grid to the point where summer blackouts are becoming the norm.

Electricity-dependent manufacturing jobs are going off-shore and regional people are missing out on jobs because coal mining is seen as evil.

Amid all this pain and mess, Prime Minister Scott Morrison says we will meet our Paris climate agreement targets “in a cantor”.

Yet none of this is sacrifice enough for the climate gods.

They are angry and Greta is channelling them.

How much more pain and disruption would be caused if we followed Greta and the UN?

Greta accuses us of being more interested in money and the “fairy tale” of endless economic growth.

But what is her alternative? Socialism? Socialism’s fine, as Margaret Thatcher famously said, until you run out of other people’s money.

Even on our “not-good-enough” climate action trajectory, Australia is hurting its people.

And the idea that the developing world must also abandon fossil fuels means billions will be denied a lift out of crippling poverty.

Who is stealing who’s dreams, Greta?

And yet Greta and her vegan cheer squad in the Lime Scooter belts of our inner cities want working people to sacrifice even more.

Unlike war time emergency measures, this “emergency” has to be born disproportionately by the working class, small business people and people on fixed incomes like pensioners. 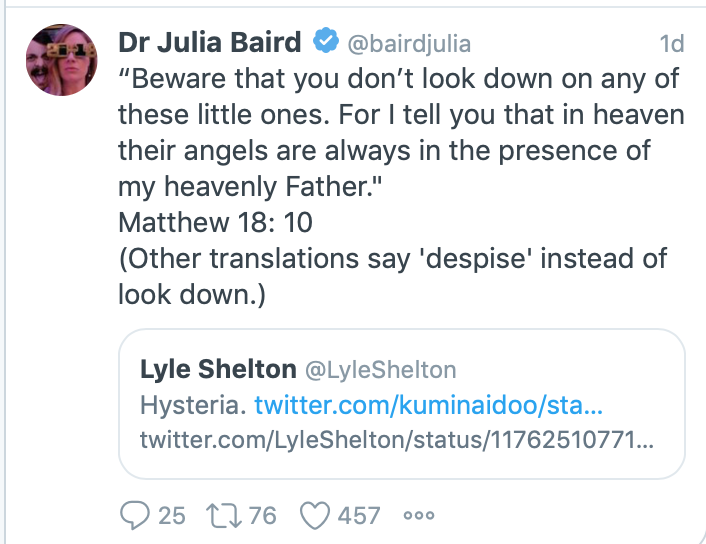 But as Sir David Attenborough told the ABC’s Tom Tilley on 7:30 last night, it is okay to fly on jets if you are flying to tell people about climate change.

If you are not travelling for this purpose, you deserve to be flight-shamed.

And despite all the climate action pain Australians are bearing, Attenborough said we are not doing enough as he excoriated Scott Morrison.

ABC elites regularly sneer at the “right wing” of the Coalition’s party room whom they blame for dragging the chain.

Yet it is these men and women who are protecting the economic interests of people doing it tough.

Many of them know that the best hope of bringing electricity prices down is to build new coal-fired power stations.

Meanwhile, the UN wants countries like Australia to reduce their carbon dioxide and methane emissions to 45pc of 2005 levels by 2030. That’s just 11 years away.

We are on track to meet our Paris agreement target of a 26 per cent reduction by then but apparently that is no longer good enough.

It is worth noting that Labor took the UN’s policy of a 45pc reduction by 2030 to the May election and lost.

While the then Opposition Leader Bill Shorten arrogantly refused to say how much this would cost the economy, respected economic forecaster Brian Fisher priced it as costing between $264 and $542 billion.

To put this into context, the Commonwealth Government’s debt is more than $500 billion.

Climate alarmists want us to write a blank cheque. To hell with the lifestyle aspirations of families in the burbs, the planet is burning, they say.

In New York this week the UN Secretary General, António Guterres, is pushing for world leaders to commit to zero emissions by 2050.

Talk about stolen dreams. Based on current technologies, it is unclear from where the world would get its baseload electricity. Battery storage is a long way from being viable for industrialised economies. What zero emissions by 2050 means for farmers who produce livestock is also unclear.

Yet Greta rails and elites egg her on. To where, no one is sure.

This may come as a shock but there are scores of parliamentarians who do not believe climate change is about to destroy life on earth, as Greta does.

I learned over 10 years as a lobbyist in Canberra that many hold reasonable doubts but like on so many issues pushed by the left, they are too afraid to speak up.

Only authorised views are allowed in the Canberra bubble.

The Coalition’s George Christensen and Craig Kelly as dismissed by most of the media as “hard-right” and as “deniers”.

Most others who agree with these three keep their heads down.

There is good reason to be sceptical because pre-industrial sea level rises are unexplained and we don’t know whether solar flares, the earth’s orbital wobbles or CO2 are the causes of global warming.

And respected scientists like Bjorn Lomborg calculate it is far better for us to adapt to any possible future warming rather than destroy our economies in a vain attempt to adjust the earth’s thermostat.

Yet the public hear a narrative that is mostly one-way traffic – human activity is destroying the planet and lazy dumb politicians are standing in the way of our rescue.

It’s as simple as that.

That’s why the elites cheered when Greta delivered their script.

Unlike most of the public, parliamentarians often have access to intimate briefings from experts as well as access to the best research.

After more than two decades of the climate wars, it is extraordinary that so many do not buy the “settled science” line of the alarmists.

Most parliamentarians are not stupid and that so many remain sceptical, even if in secret, suggests that the evidence with which they are continually bombarded is unconvincing.

It seems like the Morrison government, while giving lip service to the idea of human-induced global warming, is not buying into the catastrophising of climate change.

It seems like Morrison is trying to draw a line under climate action – ticking the box – but keen to get on with building the economy.

Resources Minister Matt Canavan has become chief defender of the coal industry because he knows from where regional jobs come.

Meanwhile, critique the human shield that Greta has become and you risk infringing the rules of identity politics.

By tweeting the word “hysteria” next to the video clip of her speech, I copped the wrath of the ABC’s Julia Baird.

First, I was disobeying Jesus’ command in Matthew 18:10 not to “look down on any of these little ones”.

A second tweet chipped me for being sexist because I used the word “hysteria” to describe what Greta was saying. 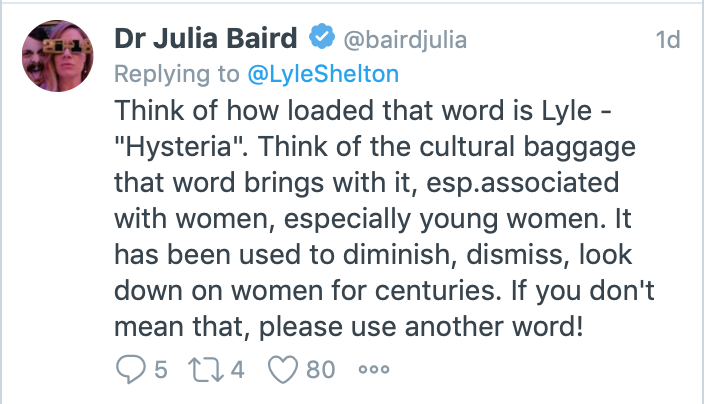 A young female, Greta is a figure beyond criticism. We must accept her oracles and amend our ways.

My tweet rhetorically asking what more we are meant to do was ignored - it only mattered that I had not shown reverence.

We dare not question angry gods.