This is no time to shrink back

This is no time to shrink back

The truth will out, it always does.

So the US Congress has now certified Joe Biden as president-elect.

Overnight, Donald Trump agreed to an orderly transition of power. A few minutes ago he released a video statement on Twitter confirming this. 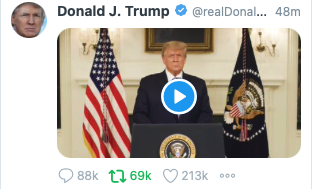 Allegations of electoral fraud and illegality of election conduct in several states, which are clearly not “baseless”, were ventilated powerfully by courageous Congressmen, Congresswomen and Senators overnight.

It was of course to no avail.

The evidence has been ruthlessly ignored.

Questions remain about whether last night’s Congressional vote to certify Biden has papered over the theft of a US Presidential election.

Surely it is in no one’s interest for those questions to remain unanswered?

Vice-President Mike Pence, who presided over the special session of Congress, chose not to use his Constitutional power to send the results from disputed states back to their state legislatures for examination.

State politicians in America have a constitutional duty to declare that the Electoral College votes they submit are not fraudulent.

Pence’s decision was despite his own acknowledgement in a letter to colleagues yesterday that serious allegations of illegality and fraud existed.

“After an election with significant allegations of voting irregularities and numerous instances of officials setting aside state election law, I share the concerns of millions of Americans about the integrity of the election.”

Presumably he would not have written that if he thought the allegations were “baseless”.

The appalling and inexcusable riot at the Capitol yesterday does not disperse the cloud over the conduct of the election.

Having written of fraud and illegality in his letter, how Pence could then preside over last night’s certification of what he obviously agrees is a tainted election is unfathomable.

But he did it.

My book, I Kid You Not – Notes from 20 years in the trenches of the culture wars, provides profile after profile of Australian politicians capitulating to the establishment consensus.

While I had high hopes of Pence, 20 years as a political activist has taught me not to get my hopes up that good people will step up.

So what now for conservatives?

My advice is hold the line. Like Athanasius in the fourth century, the world is against you but you are not wrong. Contra Mundum (against the world, or in our case against the establishment) must be our mantra.

You are not wrong to be pro-life, pro-family, pro-smaller government, pro-freedom and pro-national sovereignty.

All of the above is under threat from the radical Left, which is now emboldened by the in-coming Biden administration. This administration has at its heart one of the most extreme Leftist politicians of our generation in Vice-President elect Kamala Harris.

It is akin to having Adam Bandt as our deputy prime minister.

The conservative movement in each country needs to re-group and leaders of character need to rise.

While I draw inspiration from my American friends, the Australian conservative movement has its own flavour and we need to keep developing this.

We are thankful for what the Trump movement has done to provide breathing space against the Left’s radical agenda.

Despite the setback of the US Presidential election and the own-goal kicked by lawless rioters, the truth will eventually out.

For those of us who are Christians, politics is important and necessary but it is never the saviour or our point of ultimate trust.

Our ultimate hope lies with the eternal King.

But we are his servants on earth and our job is to image Him as we bring his peace and justice to the affairs of his world through humility, servanthood and resolve.

Let’s stay faithful to the one who is the Truth and let’s keep speaking.

This is not a time to shrink back.