If you think Canberra elites will let us be free, think again.

The gulf between elites in the Canberra bubble and the lived experience of ordinary people was again in full bloom at the National Press Club yesterday.

Frightening ignorance, or perhaps wilful blindness, of what’s at stake when it comes to freedom of religion means Christians are potentially in grave danger.

This is not overstating things. If a nation no longer understands and values freedom of conscience, from where freedom of religion springs, people will be crushed.

There is no question that the rise of identity politics and its weaponisation through same-sex marriage legislation means those of us who dissent are on the wrong side of a plethora of complicated anti-discrimination laws.

Yesterday’s occasion was a debate between the Australian Christian Lobby’s Martyn Iles and the Australian Secular Lobby’s Fiona Patten on religious freedom and the Morrison Government’s proposed Religious Discrimination Bill.

You can watch the full debate on the ABC’s iView. Martyn did brilliantly.

The Canberra media, and Patten, have largely dumbed the issue down to a matter of Christians wanting to keep the right to sack gays and say mean things about them.

Basically, it is seen by them as the Government facilitating the right of Christians to be bigots.

Their questions reflected this.

The problem was best illustrated when Press Club board member and Australian National University academic Mark Kenny (pictured) asked Martyn what all the fuss was about. 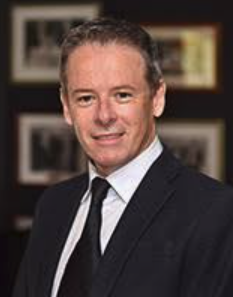 Despite Martyn opening his talk with a list of cases where Christians had been punished at work or university for expressions of their faith and belief, Kenny prefaced his question with “I’m yet to hear any compelling reason why we are having this debate”.

The steaks are very good at the Press Club but I know Kenny was not distracted by a juicy piece of meat on his plate while Martyn was speaking. He’s a vegetarian.

He simply did not want to accept that religious people should be allowed to express in public and live out in their schools, charities and churches a view contrary to approved elite opinion.

It was one thing for him to be dismissive of the cases Martyn raised, it’s another for a journalist to have not been reading the news the past few years.

The first thing I was taught as a first-year journalism student in 1988 was read the papers. Everyday.

It was as if Kenny have never heard of Archbishop Julian Porteous, the Catholic Archbishop of Hobart who was dragged before a tribunal for distributing Catholic teaching on marriage to Catholics. It was in the news and not too many people think he should have had to engage lawyers to fight a case like that, even though the complaint was eventually dropped after about six months.

Maybe Kenny had not heard of Israel Folau. Maybe he thinks Folau is just a bigot who deserves what he gets.

I wonder what Kenny thought about Martyn’s raising of rugby league bad boy Matt Lodge who broke into a family home in New York and assaulted the occupants and is now in the running to be captain of the Brisbane Broncos.

But hey, ban Folau for quoting the Bible on Instagram. For life.

Perhaps because he was a former political editor of the Sydney Morning Herald Kenny doesn’t read Rupert Murdoch’s The Australian which recently reported that Ballarat Christian College was being sued because one of its teachers doesn’t agree with the school’s Christian view of marriage.

I could go on.

Kenny was barely disguising his contempt and I would even say anger as he asked his question. It’s worth quoting his question at length. Watch him on iView.

“The examples you gave at the beginning Martyn seemed to be pretty marginal to me, they were one-sided examples… I’m wondering why the government is wasting so much time trying to deliver rights that are essentially (already) there. I’m also wondering why the churches take the view – and have no compunction about this – that they can have discrimination within their organisations and yet seek to discriminate against people in organisations that they run. It seems to me to be a staggering piece of hypocrisy and I’d appreciate your response.”

“Two key sections in the bill are in response to the Porteous case and Folau case,” he said.

“The (other) cases are very very real. That’s the only reason I support this thing. I see a rising trend of intolerance and I see this (bill) as helpful because it sends a message that bureaucratic elites cannot target people and pursue them and finish them and end their careers just because they don’t like what they are saying in their private life.”

Martyn also made it clear that there is nothing unreasonable about a Christian organisation, like a school or charity, being free to maintain its religious ethos.

That may mean discriminating in favour of staff who support the mission, which is no different from what is allowed for political parties.

All this seemed lost on Kenny.

I say to my kids that if they want to be Christians in today’s Australia, they had better count the cost.

If Kenny is reflective of the view of Canberra elites and of universities like the ANU, we are in a world of trouble.

The Morrison Government’s proposed Religious Discrimination Bill is certainly no panacea and as Martyn said yesterday it needs major amendment.

The real problem is our complicated web of anti-discrimination laws which make it potentially illegal to offend, humiliate, insult or vilify people based on protected attributes such as race, sex, gender, sexuality and age.

If the Government really wanted to uphold freedom of speech and religion it would start there. But the left hold that ground and it is a place angels fear to tread, let alone politicians, most of whom are not known for courage.

The law should not seek to regulate speech or religious belief. Speech should be free and the court of public opinion in civil society should be used to call out those who are mean to others. Not the law.

To take people to court or a tribunal because their feelings are hurt means speech is no longer free.

Free speech is in even more danger now that marriage has been redefined in law and that transgenderism is on the rise.

Anyone who wants to speak about marriage being between one man and one woman is vulnerable, as was Archbishop Porteous.

Christian schools and charities are worried.

Christians who work in big corporations and the public service are surrounded by people wearing rainbow lanyards and receiving “diversity” sermons through the company intranet.

They are worried about their career prospects because they hold to what was once a mainstream view of marriage and gender. They keep their heads down at work.

But if Chris Kenny is the benchmark of elite attitude to those of us who dissent from rainbow politics, we are in for a rough ride.

Tolerance once meant making room for each other’s difference. Today it means conform you bigot, or else.