Why Greg Hunt won't push back on children's gender whisperers

Not even 200 concerned doctors can overcome the political power of the rainbow lobby.

It seems that Health Minister Greg Hunt has sided with the LGBTIQA+ lobby to quash an inquiry into controversial sex change treatments for children.

Or has he? There is confusion, as Binary Australia spokeswoman Kirralie Smith reports.

This is in the face of calls from more than 200 medical experts for the probe into the ethics and safety of plying children with puberty blockers and infertility-inducing cross-sex hormones and irreversible surgery.

With Dr Michelle Telfer’s controversial gender clinic at the Royal Children’s Hospital in Melbourne pushing hard for more taxpayer money so it can start performing double mastectomies on girls under the age of 18, Hunt’s decision is all the more perplexing.

The government’s weakness goes to the enormous power handed to the rainbow political lobby in the wake of the 2017 same-sex marriage plebiscite, which stripped the requirement for gender diversity from the building block of society. 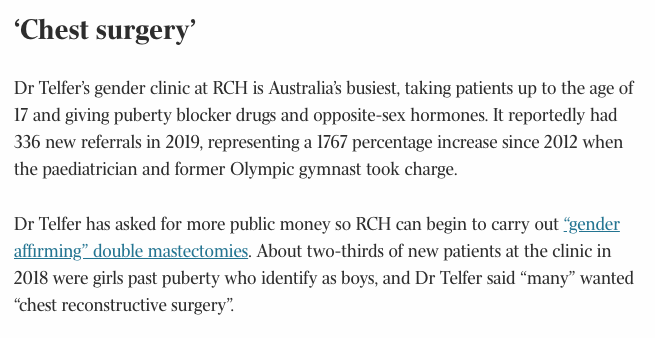 It seems few in politics have the courage now to stand up to this political movement which is on the march in schools, making gender-fluid teaching of children compulsory in many states.

Since gender fluid programs like “Safe Schools” and the promotion of transgenderism in popular culture began ramping up, the numbers of children thinking they have been born in the wrong body presenting at new gender clinics around the nation has sky-rocketed.

According to reporting by Bernard Lane in The Australian, Telfer’s clinic is the busiest with 336 new referrals in 2019, representing a 1767 percentage increase since 2012.

“Safe Schools” emerged in Victorian schools at the end of 2014.

In contrast to Australia’s fear of offending the rainbow lobby, the UK’s Minister for Women and Equalities, Liz Truss, is pushing to ban sex change operations and other irreversible treatments on children.

“Before the age of 18, when people are still developing their decision-making capabilities, they should be protected from making decisions that are irreversible about their bodies that they could possibly regret in the future.”

The UK’s rainbow lobby are of course incensed by Truss.

Lane reports: “The transgender lobby group Mermaids said this change threatened ‘a new form of inequality’ in medicine, and claimed post-operative regret with trans surgery was ‘far lower than for other forms of plastic surgery’.”

Despite Scott Morrison saying children did not need “gender whisperers”, his government has struggled to stand up to the activists empowered by the gay marriage debate.

Morrison’s Sports Minister Richard Colbeck has released transgender guidelines for all sporting clubs which recommend allowing biological males to compete with females and use their change facilities.

In time this will smash women and girls’ sports, as well as compromise their privacy rights.

State governments are moving to ban so-called conversion therapy, with a Queensland bill threatening 18 months jail for doctors or counsellors who decline to provide sex-change treatment to children.

The world has gone nuts.

At some point someone in politics is going to have to find the courage to stand up to the rainbow bullies.