After several weeks “off work unwell”, The Australian’s Bernard Lane returned revealing the beginnings of push-back on LGBTIQA+ ideology-demanded treatment of children.

His story on Wednesday reported that one of Australia’s secretive children’s hospital gender clinics is under review.

A judge has ordered that responsibility for deciding whether a child takes potentially harmful body-altering chemicals or has irreversible surgery be given back to the courts.

This is a bombshell which of course has not been picked up by other media who tend to look the other way when it comes to the potential harms to children from gender-fluid ideology.

The taxpayer-funded ABC only every publishes or broadcasts favourable coverage of efforts to indoctrinate children and change their gender.

This week’s revelation is a major rebuff of the likes of the controversial Doctor Michelle Telfer at the Royal Children’s Hospital gender clinic in Melbourne who had successfully campaigned for such decisions to be taken out of the hands of the courts and given to clinics like hers’.

Lane reports that the recent Australian court ruling was influenced by 23-year-old Kiera Bell’s successful case against London’s Tavistock gender clinic after she was plied with puberty blockers as a 15-year-old before later going on to have her breasts cut off and regret it.

The new cautious policy at the unnamed Australian gender clinic was revealed in a recent decision by a state court exercising a family law jurisdiction, with Justice Susan Duncanson noting that the Tavistock ruling was “integral” to the change. The Tavistock, England’s only NHS specialist gender clinic for children, has appealed.

Justice Duncanson, who suppressed identifying details of the Australian case before her involving a 16-year-old biological female wanting to begin testosterone injections to make her body masculine, noted the new policy of court approval for treatment would apply while the children’s hospital gender clinic underwent a review.

Before he went on leave, Lane broke several stories in The Australian reporting overseas and local misgivings about the current “affirmation” approach to treating children who felt confused about their biology.

And yesterday Lane tweeted news of medical experts in Finland now warning that a cautious approach to treating children with body altering drugs and surgery should be taken.

Again, this is a major setback for rainbow political activism which has found its way into children’s medicine. 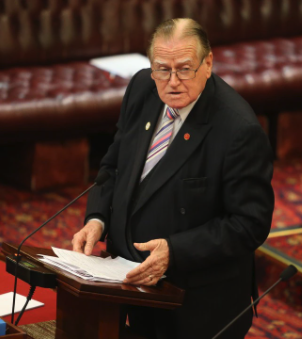 The news comes as Christian Democratic Party Leader, the Reverend Honourable Fred Nile, has been asking questions in Parliament of the Health Minister Brad Hazzard about the safety of blockers, hormones and surgery for gender-confused children.

Sadly, Hazzard and his representative in the Legislative Council, Bronnie Taylor from the Nationals, have been providing non-answers which only indicate their complicity with the potential harming of children.

Their latest response to Reverend Nile squibbed the question of who pays compensation for children, like Keira Bell, who later come to regret the irreversible harm done to their bodies as a result of state-sanctioned gender treatments.

This issue has a long way to play out and with NSW Education Minister Sarah Mitchell, also of the Nationals, unable or unwilling to stop the gender fluid indoctrination of children in NSW schools, children continue to be exposed to harmful rainbow ideology.

ACTION: Sign the petition to end gender-fluid ideology in schools.