What will it take for people to rise up and say enough?

There’s no other way to put it.

Whether they knew it or not (and to be fair most of them knew not what they did), Queensland voters at the weekend rewarded an evil government.

I know that’s a big claim. Let me explain.

Most people thought they were voting for Aunty Annastacia Palaszczuk who kept them safe from Covid.

Whether that could have been achieved or not without Labor’s hard border lockdown decimating tourism and peoples’ livelihoods we’ll probably never know.

Certainly the conflicting advice from Prime Minister Scott Morrison’s medical experts was that border closures were unnecessary, the key being to ring fence coronavirus hot spots - not entire states.

But the border politics played well for Palaszczuk and she was clearly driven by taxpayer-funded polling as much as any medical advice from chief health officer Dr Jeannette Young.

The horror of Victorian Premier Dan Andrews' totalitarian lockdown resulting from his corrupt handling of hotel quarantine fed into the psyche of Queensland voters.

They saw Palaszczuk as a nice lady (and she is) who rides above all the integrity scandals of ministers like former deputy premier Jackie Trad and the bullying of Labor’s union puppet masters.

What voters also overlooked was the long rap sheet against the Palaszczuk Government.

Mid-term the Palaszczuk Government legalised abortion-to-birth and provided no protection for women being coerced by men to kill their babies, an all-to-common occurrence.

There was no protection for unborn baby girls who are often killed because, for cultural reasons, some ethnic parents prefer a boy.

All of this evidence was presented to Palaszczuk and her Labor politicians but still they rammed the legislations through with Trad riding shotgun to make sure the troops did the right thing, or else.

There were hugs and high-fives when the baby killing, mother hurting laws were passed, as this powerful pre-election advertisement from Cherish Life documents. 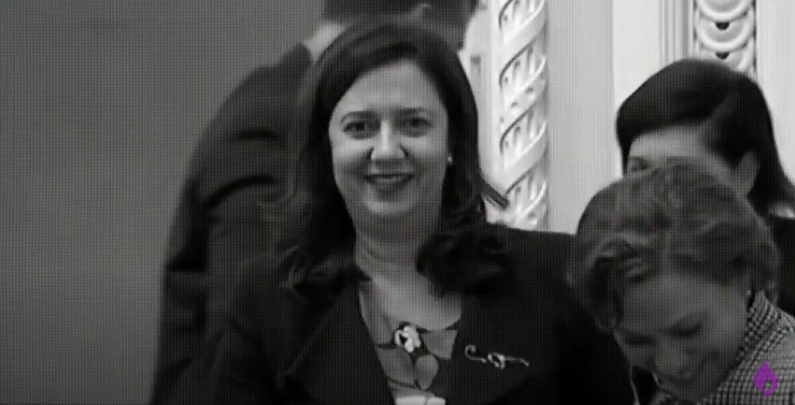 On the first anniversary of the passing of the law, Trad held celebratory drinks at a swank West End bar to celebrate…baby killing.

She ignored Palaszczuk’s plea not to celebrate their macabre achievement which allows tiny unborn humans to be poisoned or torn limb-from-limb in their mothers’ wombs.

Sadly many Queenslanders in their muddled thinking support early stage abortion but find abortion-to-birth a bridge too far.

They know what they are seeing on the ultrasound screen.

Many people don’t believe that abortion-to-birth is what the law allows and even a riled “Health Minister” (scare quotes intended) Stephen Miles tried to deny it during the election campaign.

But it’s there in black and white. Go read the legislation.

A poor public debate facilitated by a compromised media and Opposition MPs lacking the will and courage to match the Left’s sustained advocacy with the truth is how these laws landed.

The sustained silence of most of the church cannot also be overlooked.

An ignorant voting public then rewards evil at the ballot box.

The next human rights in the gun of Palaszczuk Labor are those of the elderly and sick.

The hard Left of Labor, goaded by the Greens and some like Campbell Newman from the LNP, are determined to legalise the use of lethal injections and poison pills as “health care”.

Two weeks out from polling day, Palaszczuk threw her normal caution on this matter to the wind and announced euthanasia laws would be in the Parliament by February.

Guided by many years of a poor public debate marked by a lack of counter voices in the public square, Queenslanders who don’t like to see loved ones suffering, went for it.

What they don’t know is that modern palliative care, which even Palaszczuk admits is woefully underfunded, can kill pain. There is no need to kill patients and risk the inevitable wrongful deaths of vulnerable people.

What they don’t know is that euthanasia is a slippery slope that quickly morphs into suicide-on-demand, sending a terrible message to those suffering from mental health issues.

Standing at polling booths handing out how-to-vote cards for the LNP, I asked the Labor booth workers how they could hand out for a party doing this to children.

One said he didn’t know this was party policy, another was embarrassed and didn’t wish to continue the conversation.

So many decent Queenslanders allowed themselves to be “useful idiots” in Labor’s child-harming social engineering project.

On the economic front, Palaszczuk and Trad as treasurer vandalised the state’s books racking up a $100 billion pre-Covid debt with very little but a bloated public service to show for it.

Queensland was becoming an economic basket case with the highest unemployment in the country and record bankruptcies, before Covid.

Trad recklessly put the approval of jobs-generating coal projects on the go-slow, hurting people in Central and southern inland Queensland who simply wanted to provide a better life for their families.

Trad’s tree clearing laws trampled farmers’ property rights with no compensation, stopping them from clearing even re-growth and clearing for fire-safety.

Her reef regulations also unfairly punish sugar growers when there is no evidence they are hurting the reef.

Labor and the Greens, who have increased their vote at this election, have profited from their lies and the disengagement of voters.

Inner city Brisbane voters have been most susceptible to the lies and despite their wealth and supposed education, cast the most uneducated votes of all.

Evil has triumphed as those leaders who know better have largely been silent.

Legalising drugs will be on the agenda in this term, mark my words.

What will it take for people to rise up and say enough?