We need to keep fighting for freedom.

This week marks the third anniversary of the Australian people’s decision to redefine marriage in law.

In the years leading up to the historic 2017 postal vote, and then again during the three-month campaign, Australians were told there would be “no consequences”.

The only people affected would be the loving couple.

This of course was a lie. But fear of being labelled a bigot drove a majority to vote Yes.

As I write, I am before the Queensland Civil and Administrative Tribunal for speaking for the rights of children to be protected from harmful gender fluid indoctrination by LGBTIQA+ drag queens in public libraries.

Perth couple Byron and Keira Hordyk have been banned from fostering children because of their Christian beliefs. They are before the Western Australian State Administrative Tribunal next week fighting for religious freedom.

Legal action was taken against Ballarat Christian College for wanting to uphold its parent community’s views of marriage in staffing decisions.

And this week, two “married” women, one an AFLW player, announced in the media the birth of “their” baby daughter.

Sadly this little girl has been denied her father, not because of tragedy or desertion, but because two “married” women selfishly decided this would be her lot in life.

The four examples above are just the tip of the iceberg.

These negative consequences for freedom and children’s rights were predicted but denied by the Yes campaign.

My recent book, I Kid You Not – Notes From 20 Years In the Trenches of the Culture Wars has 15 chapters. 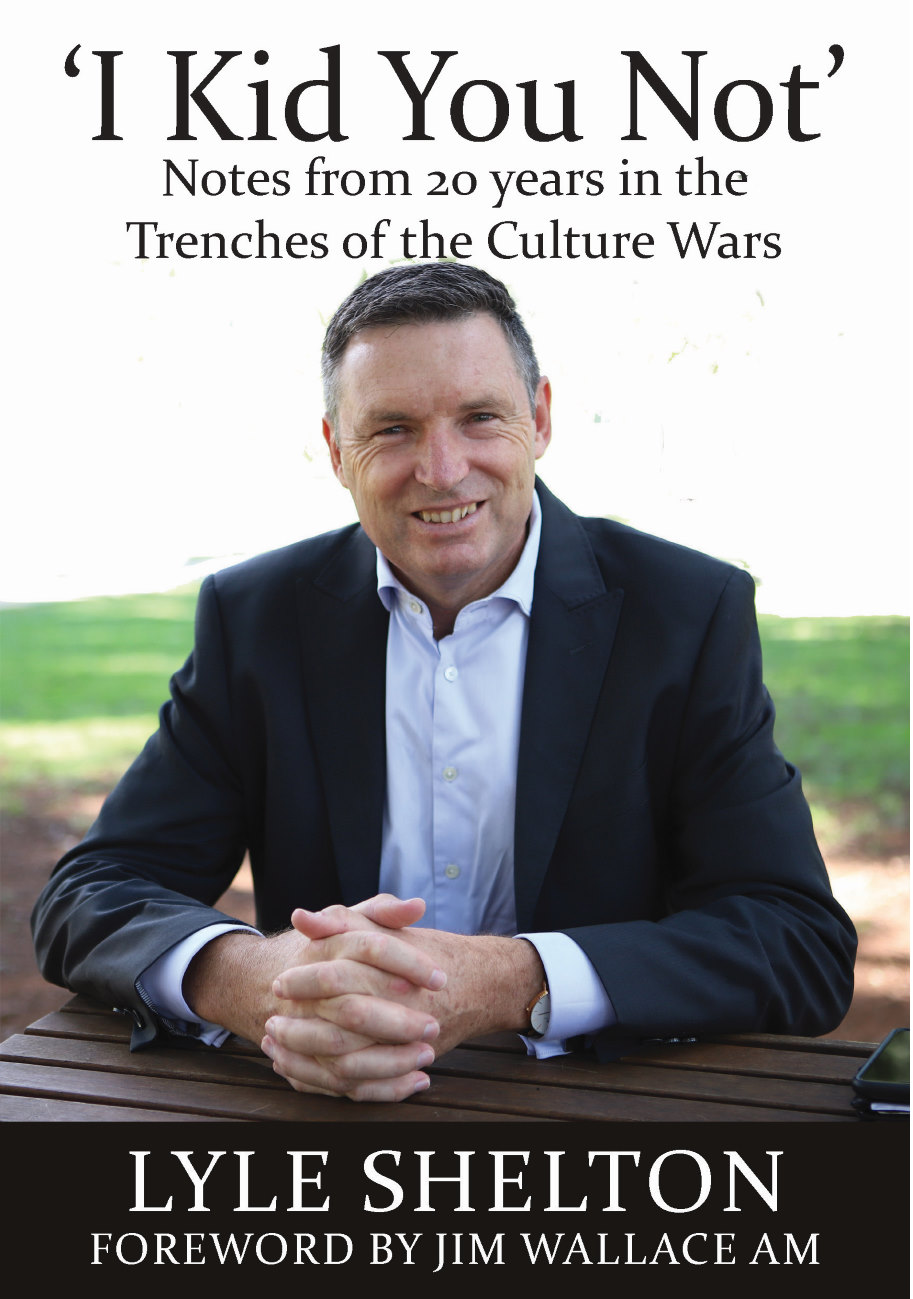 Three are devoted to the valiant but unsuccessful campaign to preserve marriage, freedom and children’s rights.

On this third anniversary of the plebiscite result announcement, I thought it worth publishing an extract from my book which chronicles what happened that fateful day. The following is from Chapter 12 – Lost in the Mail.

On November 15, the day the Australian Bureau of Statistics announced the results of the plebiscite, key Coalition for Marriage campaign staff and volunteers gathered at the Stamford Hotel in Sydney.

We watched the announcement in silence. We knew we were going to lose – we could sense momentum was against us.

But it still hurt when the result was read out on a live broadcast from the ABS.

The media was waiting outside the room, but it fell to me to address our team first. Everyone was quiet. One of the young staffers who, like all of us, had put his heart and soul into the campaign was in tears.

stage, a wave of emotion hit me. I couldn’t speak for a few seconds.

Someone called out something encouraging which helped lighten the mood and I regained my composure.

We had been in an historic campaign. A whirlwind. We had done the right thing, even if our nation rejected our message.

reverberate. I thought it important to pray and did so.

The doors were then opened and the media flooded in.

In the barrage of questions I stressed that we expected the parliament to soon legislate to change the Marriage Act in line with the people’s decision.

However, I said we expected the legislation to reflect the promise of the Yes campaign to the Australian people that there would be no consequences to the freedoms of the people who had voted No. That of course did not happen and freedom of speech, parents’ rights and freedom of religion remain in limbo at the time of writing.

After the media left the room we held a telephone hook-up with many of our volunteer field campaigners from around the nation.

They had been magnificent. Most had endured verbal abuse, some had been spat on. All were completely dedicated.

As I walked out of the Stamford on to the Sydney streets another wave of emotion hit me from out of the blue. It wasn’t sadness as much as grief.

It was an overwhelming feeling that what had just taken place was entirely avoidable. I began to feel a deep sense of grief for the lack of leadership in our nation that had brought us to the point where we had lost something precious.

As the momentum for change had built over the previous ten years, leaders who knew that to redefine marriage in law was wrong had been silent.

On November 22 I was flying to Hobart to thank our campaign volunteers. As I sat on the tarmac at Canberra airport waiting to take-off, I read news on my iPhone that Malcolm Turnbull had established a commission led by former Howard minister Philip

Ruddock to make recommendations on how to protect religious freedom in Australia.

I was incensed. Our whole campaign was about the need to protect freedoms, something that was ridiculed as a red-herring by the Yes campaign. Now the rainbow flag waving PM was acknowledging, after the vote, that something needed to be done.

Former Prime Minister John Howard, in one of several impassioned interventions in the debate, called for protections for freedom of speech and religion to be put in place before same-sex marriage was legislated.

So too had former Deputy Prime Minister John Anderson. Both were sadly ignored by their own parties.

From the tarmac I tweeted: “When the freedom of speech of 5 million Australians is about to be wiped out before Christmas, this is the Govt’s response. Sadly the new civic totalitarianism can’t even be resisted by @LiberalAus”.

By the time I landed in Melbourne The Australian on-line was running with the headline “Religious freedoms wiped out by Christmas”. And that’s what happened.

A month later when Parliament debated the legislation to give effect to the people’s vote, amendments to protect freedom of speech, religion and parents’ rights were voted down by Labor, the Greens and a significant group of Liberals.

Freedom amendments, put forward by Liberal Senators James Paterson and David Fawcett, were crafted to respect the peoples’ vote for same-sex marriage, but also to give effect to the promise of the Yes campaign that no one else’s freedoms would be affected.

The Paterson-Fawcett amendments would have prevented the weaponisation of state and federal anti-discrimination law which contain clauses criminalising vague notions of offense, contempt or ridicule.

Their amendments were designed to protect freedom of speech, freedom of religion and parents’ rights not to have their children indoctrinated into rainbow sex and gender fluid ideology at school.

Noisy rainbow flag waving activists in the public gallery of the House of Representatives cheered when each freedom amendment was voted down.

Speaking to The Australian newspaper one year on, John Howard said the Turnbull government was mistaken in not passing religious freedom protections at the time of the parliamentary vote to redefine marriage.

The Australian went on: Mr Howard warned that the “politics of discrimination” had “become so potent” it was difficult to have a rational discussion over religious freedoms. He also defended the right of faith-based educators to sack staff who undermined their values.

“I’m disappointed that we can’t have a commonsense solution,” he said.

“If someone is teaching at a Catholic school and they start ridiculing the Catholic religion, well of course the school is entitled to arc up about that.”

After the legislation passed the Parliament, #EatShitLyle was trending globally on Twitter, urged on by the likes of ABC personality Benjamin Law (who said he wanted to “hate f….” conservatives like Liberal MP Andrew Hastie).

The ink was barely dry on the same-sex marriage legislation when Labor and the Greens tried to strip Christian schools of the right to employ staff who share the parents’ ethos on marriage.

refused to back them and then Labor went on to lose the 2019 election.

The schools had dodged a bullet that would have pierced the heart of Christian education and its ability to uphold Biblical sexual morality.

The same would have been true for Muslim schools wishing to uphold the moderate Muslim view of marriage and family.

But more than two years on, the freedom of Christian schools to employ staff who share the parent community’s beliefs about marriage remains uncertain, as the Equality Australia’s attack on Ballarat Christian College shows.

It didn’t matter if the baby had a penis or a vagina. In their view of the world, what would a doctor know when he or she “assigned” gender at birth.

What would a parent know? Let the kid decide after he or she has had an early childhood educator read to them the “Safe Schools” resource for four-year-olds, The Gender Fairy.

Hardened Greens and Labor Tasmanian politicians, with the help of a rogue Liberal, Sue Hickey, rammed the optional gender-on-birth-certificate law through the Tasmanian Parliament in April 2019.

In June 2019, after the re-election of the Coalition Government, Prime Minister Scott Morrison’s Sports Minister, Senator Richard Colbeck, signed off on guidelines for the nation’s junior sporting clubs advising them to allow children to compete as the gender with which they identified.

That’s right. Harry can become Sally and play netball with the girls and use their change rooms.

Why, at the time of writing, Morrison had not overruled Colbeck is mystifying.

Why is a conservative government helping destroy girls’ and women’s sport?

This will obviously not end with the under 12s. What about the under 14s? The Olympics? What does this crazy gender-fluid rainbow world mean for girls and women? Certainly not equality and certainly not privacy.

Not content to steal children from their natural parents and punish anyone who says mum, dad and the kids is the ideal family construct to which civil society should aspire, rainbow politics upends the very biological fact of what it means to be human – male or female.

The Yes campaign’s repeated denials of a looming brave new gender-fluid world and that other peoples’ freedoms would be affected were nothing but calculated lies.

Freedom of speech, the truth about gender and the right of children to know the love of a mother and father were lost in the mail of the 2017 postal plebiscite.