How “termites” are hollowing out the Liberal Party

“…like termites, they’ll get in and they’ll eat us from the inside out…”

These words are from Turnbull Cabinet Minister Michael Sukkar who is valiantly trying to resist the forces of the Left inside the Liberal Party.

His comments were sensationally recorded electronically and leaked, probably by someone from the Liberal Left seeking to embarrass Sukkar.

There is a battle raging for the heart and soul of the Liberal and National parties.

I applaud the people who are fighting to try and keep the “conservative” parties conservative.

But I believe we need a Better Way.

The leaked recording revealed Mr Sukkar predicting that Liberal Conservatives would overcome the Left within 12 months.

The comments were made 18 months ago. Clearly reforming the Liberal Party is hard going.

We are seeing how hard this project is here in Queensland where grass roots LNP conservatives in Toowoomba are challenging the pre-selection of Turnbull cabinet minister John McVeigh.

Despite promising at his inaugural pre-selection in 2016 that he would uphold the timeless definition of marriage, he reneged on this and voted to re-define marriage when the Parliament legislated in the wake of the plebiscite.

His vote was also cast against LNP policy and in the face of his Groom electorate which narrowly rejected same-sex marriage.

Instead of disciplinary action, McVeigh is being rewarded.

The Left of the Liberal party know they can get away with their bad behaviour, such as blackmailing the Prime Minister last July, with impunity.

Christopher Pyne’s “black hand” movement is in the “winners’ circle”.

But what is even more puzzling to conservatives is that supposedly conservative LNP politicians such as federal Home Affairs Minister Peter Dutton and State Opposition Deputy Leader Tim Mander, have given character references in support of McVeigh’s pre-selection.

Conservatives in the LNP should really be focussed on pest control, not helping the "black hand". 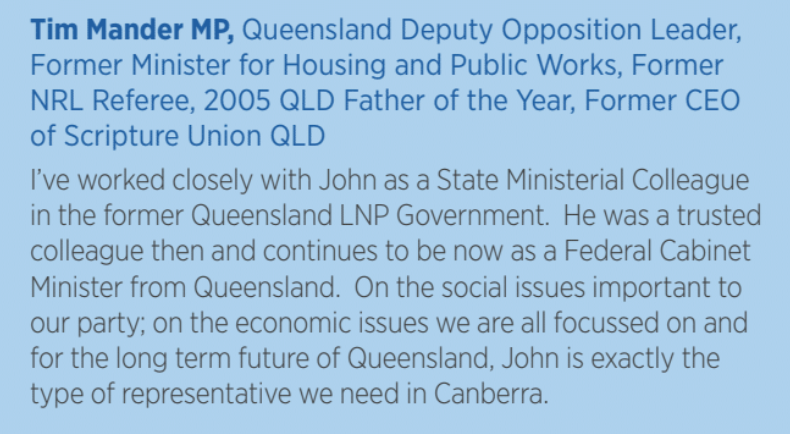 The termites Michael Sukkar warns of have hollowed out a party that once would never have dreamed of backing a redefinition of marriage.

Queenslanders are now dealing with the consequences of same-sex marriage with freedom of speech under threat, gender-bending birth certificates proposed and gender-fluid indoctrination of children imposed at school.

I get that the Australian people voted for same-sex marriage.

But I wonder if the “termites” had not been hollowing out the Coalition over past decades, whether things might have been different had there been more resolve and courage.