The freedom of every Australian is on trial.

The Sunday Mail today revealed what the two drag queens suing me want.

However, the paper didn’t report everything, I get that space is limited.

But critical to the story is their key legal demand: that I be gagged. Forever. (See Orders sought, 18 (c) on page 5.) 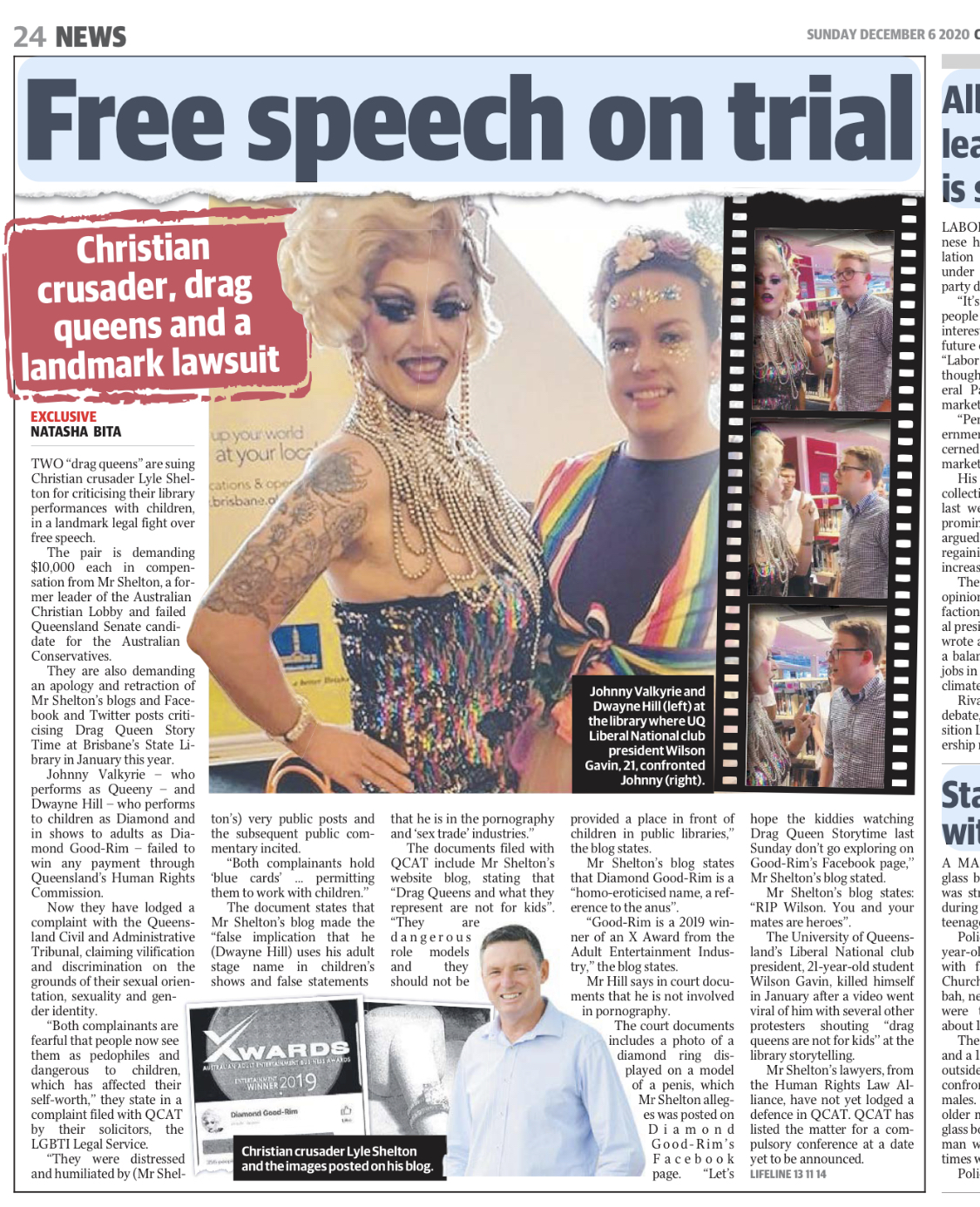 Their legal action, supported by the taxpayer-funded LGBT Legal Service, is a warning shot to every concerned parent in Australia. Don’t criticise Drag Queen Story Time. Or else.

I will not be granting their demands. For to do so would surrender the freedom of speech of all Australians.

At stake is the freedom of parents to critique and debate the demands for influence on their children coming from an aggressive rainbow political movement.

I have done none nothing wrong. You and I should be allowed to think and speak about the issues that arise from placing LGBTIQA+ gender-fluid and adult entertainer role models in front of children in public libraries.

Her reporting of what he represents is accurate and more is available in my earlier posts.

“We have a right to perform, regardless if it’s to children or adults.”

Many parents would disagree and would want to be free to discuss this.

However, perhaps for reasons of space, details about the other drag queen, “Johnny Valkyrie” queen were not mentioned.

That is a shame because last week Britain’s High Court struck a blow to the idea that gender conversion therapy should be practiced on children.

Valkyrie is a woman, who since reading to children as an advocate for gender fluid ideology, has undergone a double mastectomy so she can present as a man.

Gender queer theory preaches the idea that children’s gender is “assigned at birth” by midwives, doctors and parents who simply assume things about babies based on penises or vaginas.

However, the LGBTIQA+ political movement’s promotion of this ideology to children received a severe rebuke in the British High Court.

A woman who had been encouraged to have sex change conversion therapy as a child, Keira Bell, and a concerned mother of an autistic daughter, won their case against the Tavistock gender clinic.

The court said children could not give informed consent to take experimental puberty blockers and irreversible cross-sex hormones.

This case should have big implications for Australia where politicians from both sides have decreed that gender queer theory be taught compulsorily to children in most state schools.

In these clinics in Brisbane, Sydney and Melbourne, children are plied with chemicals to block puberty and cross sex hormones which have irreversible side effects.

Some children in Australia have even been granted double mastectomies.

“Australian courts have said that a 15-year-old girl could give an informed consent to a double mastectomy (while) the English court has said a 15-year-old probably doesn’t have the capacity even to give consent to puberty blockers, let alone hormone treatment and irreversible surgery.”

I contend that a key pathway to gender confusion is the ability of the LGBTIQA+ political movement to recruit young. Very young.

That’s why I wrote about Drag Queen Story Time. That’s why none of us should allow taxpayer-funded political activists with the backing of flawed laws to silence us.

One more thing. Those of us who fought the LGBTIQA+ political movement’s crusade to de-gender marriage warned that the indoctrination of children would be next.

The same-sex marriage Yes campaign, which now spends its time supporting legal action against Christian schools, flat out denied there would be any consequences for freedom of speech and for parent’s rights not to have their children taught radical LGBTIQA+ concepts.

Defending their promotion of Drag Queens Story Time, the Newcastle City Council said it was the result of same-sex marriage.

Queensland’s former Education Minister Grace Grace said the same about why parents now had to accept their children being taught gender fluid indoctrination at school.

Australians were lied to in the 2017 same-sex marriage debate. Freedom of speech and the well-being of children is now at stake. Big time.